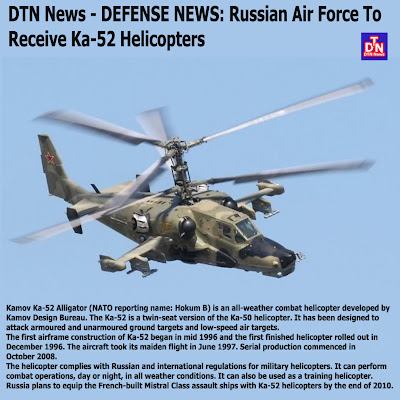 The Ka-52 is a modification of the basic Ka-50 Hokum model, it is armed with 30-mm cannon, Vikhr (Whirlwind) laser guided missiles, rockets, including S-24s, as well as bombs. The helicopter is also equipped with two radars, one for ground and one for aerial targets and a Samshite nighttime-daytime thermal sighting system.

The development of the Ka-52 started in 1994 in Russia, but its serial production began only in 2008.

Earlier in the day Drik said that the Russian Air Force would receive up to 100 Sukhoi fighter jets by 2015 as well as twenty-five new Su-34 Fullback fighter-bombers in the next few years.

Deputy Air Force commander Lt. Gen. Igor Sadofyev pledged in late 2010 that the Russian Air Force will procure over 1,500 new aircraft and significantly increase the number of high-precision weapons in its arsenal by 2020.