Source: DTN News - - This article compiled by Roger Smith from reliable sources By Sui-Lee Wee - Reuters
(NSI News Source Info) BEIJING, China - January 14, 2011: Beijing confirmed this week it had held its first test flight of the J-20 stealth fighter jet, surprising many in the international community who had underestimated China's ability to develop technology to one day rival the United States. 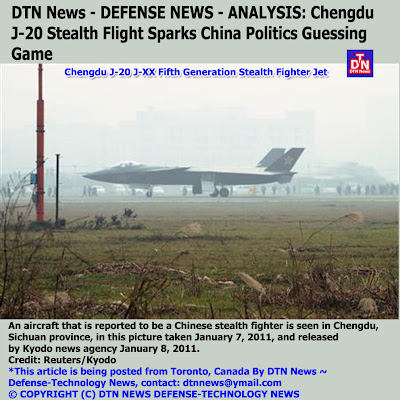 Was the timing of the launch meant to coincide with Gates' visit and, if so, why; and was Chinese President Hu Jintao genuinely unaware of the flight, signaling a worrying lack of communication between China's military and its civilian leaders?

Hu told Gates the launch was not designed to coincide with the U.S. Defense Secretary's visit.

Not everyone is convinced.

Analysts say the timing of the flight not only underscores the lack of trust between the two militaries, but a lack of communication between China's military and civilian government.

"No matter how you look at it, the possible explanations for the apparent civil-military disconnect revealed in the meeting between President Hu Jintao and Secretary of Defense Robert Gates are all decidedly worrisome," said Drew Thompson, a China expert at the Nixon Center in Washington.

"Whether Hu Jintao is being snubbed by his own military, or whether he was aware and endorsed the flight test at the time of the Gates visit to signal China's intent to challenge the U.S., both possibilities are equally disturbing for the bilateral relationship."

Gates himself told reporters in Tokyo on Friday he believed the test flight "can be explained by bureaucratic mistakes," adding he had no doubt Hu was in overall control.

"There have been more than a few occasions where the United States military was conducting an exercise or carrying out an activity and not sensitive to the fact that a foreign visitor might be in Washington at the same time," he said.

"But on the whole I think that this is something that is a worry and one of the reasons I have pressed so hard for there to be a deeper, senior level civilian, military dialogue with both civilian and military representatives from both countries is that we have no forum right now on security issues, or military issues, that includes senior civilians and military."

The test flight will draw unwanted extra attention on China's military intentions and muddy the waters ahead of Hu's visit to Washington next week.

Military ties are among the most brittle links between the United States and China, grappling with trade strains, security distrust and human rights disputes that have unsettled relations between the world's biggest economy and the emerging number two.

Chinese government officials and state-run media have repeatedly said the stealth jet should not be seen as a threat. China has repeatedly said its military modernization program is for defensive purposes.

"We shouldn't listen to the words but look at the deeds and its achievements," said Jean Pierre Cabestan, a professor who specializes on Chinese politics at Hong Kong's Baptist University. "One thing the Chinese know pretty well is that there is no soft power without hard power."

"But China seems to be on the defensive -- it feels the need to assure more than before that its intentions are peaceful."

DOES THE PARTY COMMAND THE GUN?

Even so, this incident has raised questions about whether rival forces among Chinese PLA officials and civilian leaders are making diplomacy in Beijing potentially troublesome.

"There's a growing divide between the civilian policymakers and the foreign policy implications of the PLA's military modernization process," Thompson said. "The PLA has been carrying out activities that the Ministry of Foreign Affairs doesn't endorse or support. There are internal differences. But I wouldn't call it a split or divide."

The real problem may be miscommunication among the different bureaucratic bodies, rather than a deep rift.

An example was China's anti-satellite test in 2007, when the Foreign Ministry looked ill-prepared for the event, which created international worry over Beijing's ambitions in space.

"Where we do see a divide in the government is not so much between the military and upper leadership; it's more between the Ministry of Foreign Affairs and other parts of the government," said Matt Durnin, a researcher with the World Security Institute.

"They don't seem to be regularly or predictably consulted on how to communicate these things to the outside world."

The test flight has also raised questions about an assertive Chinese military, whose traditional mandate has been to preserve the Communist Party's monopoly on power, and its influence on foreign policy.

Last year, some PLA officers spoke out about foreign policy on television, causing concern among its neighbors that China's military could push its own agenda ahead of a leadership transition in the next two years.

For all the military's hardline rhetoric on territorial disputes in the East and South China Seas and the U.S.' military exercises on the Korean Peninsula last year, most of it has been all bark -- with no bite.

"What we've seen is that despite a lot of frustration and frankly a lot of anger...in terms of strategic follow-up action, there's been very, very few in terms of China," said Ryan Clarke, who specializes in Chinese defense issues at the National University of Singapore's East Asian Institute.

"To me that's an indicator that the CCP and civilian leadership are still in control and they are still more rational and level-headed than their military counterparts."

China's nine-man Politburo Standing Committee, the nation's top political body, is staffed with technocrats and has no military representative, suggesting too that the rising influence of the PLA in China's diplomacy could be overplayed.

The stealth test flight came against a backdrop of a massive Chinese military modernization program. China's plans to develop aircraft carriers, anti-satellite missiles and other advanced systems, and its lack of transparency about its program have worried neighboring countries and Washington.

Analysts say the test flight could prompt China's neighbors, including South Korea and Japan, to look even more to the U.S. for protection.

Some southeast Asian nations have been accumulating weapons to counter the rise of an assertive China, which has asserted sovereignty over islands in the South China Sea that are also claimed fully or partly by countries such as Vietnam and Taiwan.

That has resulted in Washington reasserting itself in the region -- actions that have riled Beijing.

The test flight could further complicate life for China's foreign policy makers, who will have to work extra hard to prove that the nation's a responsible stakeholder in the global community -- a job made increasingly difficult given the rising political backlash in the West.

(Additional reporting by Chris Buckley and Ben Blanchard in Beijing andPaul Eckert in Washington and Phil Stewart in Tokyo, Editing by Jonathan Thatcher)