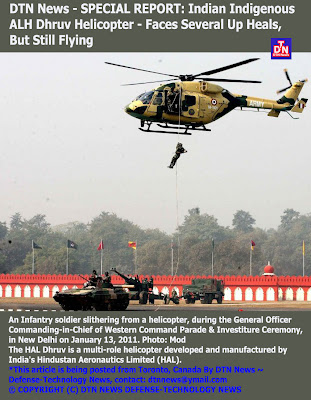 The helicopter, which is built to FAR 29 specifications, entered series production in 2000. 18 Dhruv helicopters were delivered to Indian Defence Forces in 2000-2003, eight to the army, three to the navy, four to the air force and three to the coast guard. The army received its first three Dhruvs in March 2002. By June 2008, 76 helicopters had been delivered to the Indian army and air force with 159 more on order. The Indian Navy has decided not to place any further orders.

In June 2008, HAL received the first export order for the Dhruv - seven helicopters for the air force of Ecuador.

In August 2006, Indian Air Force and Coast Guard Dhruv helicopters were instrumental in rescue operations after devastating floods in India. Over 500 people were rescued.

In February 2007, the Dhruv was qualified for high-altitude / low-temperature operations in Kashmir and Jammu.

In August 2007, maiden flights took place of the Dhruv powered by the new Shakti engine and of the weaponised variant of the helicopter. And In September 2007, the Indian Army announced that the Dhruv was ready for deployment to the Siachen sector in the Himalayas. The helicopter was deployed to the high-altitude airbase at Manasbal (Srinagar) and, in October 2007, a Dhruv helicopter flew at a record altitude of 27,500ft in Siachen. The armed variant is scheduled for initial operating capability in December 2009.

Hindustan Aeronautics Limited and Israel Aircraft Industries have an agreement to market the Dhruv helicopter worldwide. IAI has developed an integrated helicopter avionics suite for the Dhruv, which includes day-and-night observation, electronic warfare suite, observation and targeting, and a flexible weapons carrying system.

The army and air force helicopters have stub wings fitted to carry up to eight anti-armour missiles, four air-to-air missiles or four rocket pods for 70mm and 68mm rockets.

In December 2006, Nexter Systems (formerly Giat) was awarded a contract for the installation of the THL 20 20mm gun turret on the first 20 Indian forces Dhruv helicopters. The turret is armed with the M621 low-recoil cannon and is combined with a helmet-mounted sight.

Weapon system integrated (WSI) versions for the Indian Army will be fitted with the Nag anti-tank missile, being developed by India's Defence Research and Development Organisation (DRDO). The Nag missile has imaging infrared guidance and a range of about 4km. The WSI variant will also have FLIR (forward-looking infrared), CCD (charge coupled device) camera and a target acquisition system with thermal sight and laser rangefinder.

The Dhruv's countermeasures suite can include: radar and missile detectors, infrared jammer, chaff and flare dispensers.

The 7.3m³ cabin accommodates several layouts. As a passenger helicopter the cabin accommodates 12 or 14 seats. A crew door and a rearward sliding door are installed on each side of the fuselage for the military helicopters. The cargo compartment at the rear of the cabin has a volume of 2.16m³. Clamshell doors at the rear of the cabin provide easy and fast access for loading and unloading cargo.

The prototype helicopter is fitted with two Turbomeca TM 333-2C or 2B2 engines rated at 740kW take-off power. A more powerful engine for the Dhruv, the Shakti (which carries the French name Ardiden 1H) rated at 900kW is being developed under a cooperative agreement between HAL and Turbomeca and will be manufactured at Bangalore. First flight with the new engine took place in August 2007 and it was certified in 2008.

"The Dhruv is of conventional design and about two-thirds by weight of composite construction."

The helicopter is fitted with self-sealing crash-resistant tanks installed under the cabin floor. The fuel system includes cross feeding and fuel dumping systems. The maximum fuel capacity is 1,400l.

The air force and army helicopters are equipped with non-retractable metal skid landing gear. All variants of the helicopter are fitted with a tail skid to protect the tail rotor in tail-down landings.

FPT Industries, Portsmouth, UK, supplies the Kevlar flotation bags for the skid and wheeled variants of the helicopter. The helicopter can also be equipped with a liferaft.

Sarang Helicopter display team flying the HAL build Dhruv helicopters participated in the Farnborough Air Show in UK from 16 to 30 Jul 08. Farnborough Air Show in Britain is considered to be the one of the biggest Air Show in the world. It would be the first time that an IAF team is participating in the Air Show. The team had participated earlier in Weddington International Air Show and Royal International Air Tattoo to commemorate the 90th Anniversary of Royal Air Force. Sarang team is one among two such helicopter display teams in the world the other being the Blue Eagle team of UK.

In June 2008 the Indian Navy asked Hindustan Aeronautics Ltd (HAL) to improve the naval version of the advanced light helicopter (ALH) 'Dhruv' before more of the flying machines are inducted into the service. Though the Navy have asserted that it had not "written off" the helicopter as speculated, it wanted HAL to work on certain suggestions to make 'Dhruv' fulfill the requirements of the Navy.

By mid-2008 the Indian Navy has virtually written off the naval variant of the Dhruv advanced light helicopter (ALH), saying it had failed to meet basic operational requirements. The navy, which operated a fleet of six [or eight] ALHs, decided against placing further orders with the Hindustan Aeronautics Limited. Navy officials said that the ALH lacked the desired endurance for mission requirements. The navy is also not satisfied with the chopper’s rotor blade folding mechanism for storage on warships and its payload capacity. The requirement of Blade Folding with a width of 3.5 meters was not feasible due to the inherent design characteristics of the ALH hingeless Main Rotor Blade with an Integrated Dynamic System. The navy wanted a helicopter to spend 2 hours and 20 minutes on task (i.e. airborne with its task payload), and have an additional reserve of 20 minutes. The Dhruv is simply not capable of meeting this requirement, which is beyond the inherent payload capacity of any 5.5 ton class helicopter and can be met with difficulty by a 10-ton class helicopter. Originally the prototype was powered by navalised and corrosion-resistant twin Rolls-Royce CTS800 engines preferred by the Indian Navy. However, HAL has instead settled for the Ardiden/Shakti engine that was not navalised.

As of mid-2008 it was planned that the Air force would induct 38 indigenous Dhruv helicopters and 16 of its armed versions with a glass cockpit and new engines.

Nepal is receiving three. In a joint venture with Israel Aircraft Industries, the Dhruv is offered for export with a Lahav avionics package, featuring a glass cockpit and Doppler/GPS navigation.

The Dhruv helicopters of the Ecuadorian Air Force.

The Dhruv has become the first major Indian weapons system to have secured large foreign sales. HAL hopes to sell 120 Dhruvs over the next eight years, and has been displaying the Dhruv at airshows, including Farnborough and Paris in order to market the Dhruv.

With a unit price at least 15% less than its rivals, Dhruv has elicited interest in many countries, mostly from Latin America, Africa, West Asia, South East Asia and the Pacific Rim nations. Air forces from around 35 countries have sent in their inquiries, , along with requests for demonstrations.

The first foreign orders for the Dhruv were placed by Nepal in early 2004, for 2 Dhruvs. Another Dhruv, a civilian version, was leased to the Israeli Defense Ministry in 2004

In June 2008, the government of Peru ordered two air ambulance Dhruvs for use by the Peruvian health services. Peru has also shown interest in the military version Dhruv.

Dhruv also participated in a Chilean tender for eight to ten 5.5 tonne, twin engined new generation helicopter, but lost to theBell Helicopters Bell 412 amid allegations of arm-twisting by the US Government. The evaluation included flights at high altitudes, hot and desert conditions, ship deck landing, search and rescue at 12,500 feet (3,800 m) MSL at a temperature of 2°C as well as long distance ferry flights, clocking 107 flying hours.

On August 10, 2008 HAL chairman confirmed it had finalized a deal with Turkey to supply 3 Dhruvs for $20 million. Turkey is planning to buy as many as 17 helicopters in medical assistance role.

India is also reportedly planning to transfer several Dhruvs to Burma. This led to protests from Amnesty International, who pointed to the use of components sourced from European suppliers as a possible violation of the EU Arms Embargo of Burma. In a letter to the President of the EU Council of Ministers, Amnesty stated that it had evidence that India planned to transfer two Dhruvs (with European components) to Burma. These reports have been denied by the Indian Government.

HAL is negotiating with Bolivia for delivery of five Dhruvs and with Venezuela for seven of the choppers in transport roles, and in Europe. The Dhruv is also being offered to Malaysia. Indonesia is also evaluating Dhruv helicopters for the Indonesian Army.

Flight certification for Europe and North America is also being planned, in order to tap the large civilian market there. 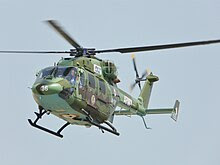 HAL Dhruv in-service with the Indian Army at ILA 2008. 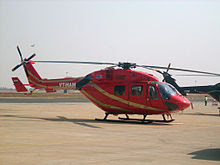