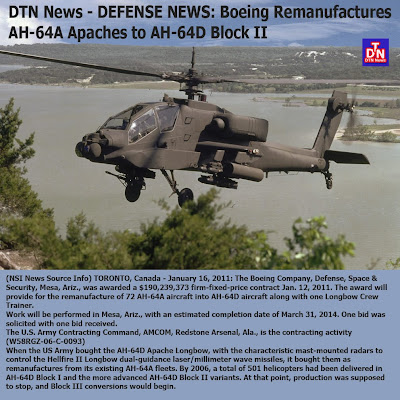 Work will be performed in Mesa, Ariz., with an estimated completion date of March 31, 2014. One bid was solicited with one bid received.

When the US Army bought the AH-64D Apache Longbow, with the characteristic mast-mounted radars to control the Hellfire II Longbow dual-guidance laser/millimeter wave missiles, it bought them as remanufactures from its existing AH-64A fleets. By 2006, a total of 501 helicopters had been delivered in AH-64D Block I and the more advanced AH-64D Block II variants. At that point, production was supposed to stop, and Block III conversions would begin.

Unfortunately, late technologies like JTRS radios, and other impediments, have given the Block III program a late start. In order to avoid a production line shutdown, which would require a very expensive restart, the US military decided to go on buying more AH-64D Block IIs until Block III was ready. Additional helicopters bought under that approach are “Extended Block IIs” – extended in their production line, not their technology. Further orders and options that stretch Block II production are “Extended Block II Plus,” or AH-64D EBII+.

Between 1984 and 1997, Boeing produced 937 AH-64As for the U.S. Army, Egypt, Greece, Israel, Saudi Arabia, and the United Arab Emirates. The combat-proven AH-64A is still in service and includes the following features:

The AH-64 Apache has been developed since its inception using incremental technology insertions at regular intervals to ensure that the world's most capable multi-role combat helicopter meets the needs of the warfighter today and in the future.