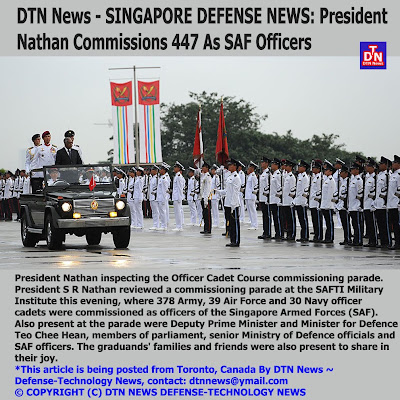 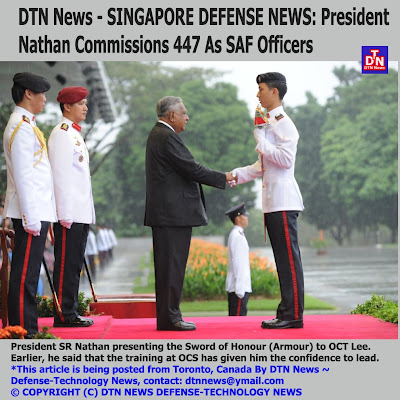 Speaking at the parade, President Nathan encouraged the graduands to be "leaders who are professional, committed, caring and who always act with integrity." He also emphasised the important role of an SAF officer as a commander in inspiring and developing a deep sense of mission and purpose in their men. He said, "Lead by example. Inspire your men and women to follow you by demonstrating a high degree of professionalism and discipline. Spare no effort when training your men and women and never compromise on performance standards. But always have their safety at heart. Lead wisely."

The parade marked the completion of 38 weeks of rigorous training at the Officer Cadet School. The demanding and realistic training exercises conducted during this course provided valuable opportunities for the officer cadets to develop their combat,planning and leadership skills. The newly commissioned officers will go on to assume command, instructional or staff appointments in the SAF.

Also present at the parade were Deputy Prime Minister and Minister for Defence Teo Chee Hean, Members of Parliament, senior Ministry of Defence officials and SAF officers as well as families and friends of the newly commissioned officers.

Despite the downcast sky on 15 Jan, the spirits of 447 officer cadets were anything but dampened. Even as the rain began to pour midway through the ceremony, they stood proud in their well pressed white ceremonial uniforms on the parade ground of SAFTI Military Institute.

The only hint of what was now behind them were the tanned skins and drops of rain water across their faces. After 38 weeks of rigorous training, these cadets received their officer rank epaulettes in the first commissioning ceremony of the year.

President S R Nathan, who officiated at the ceremony, urged the newly-commissioned officers to lead by example. He said: "Inspire your men and women to follow you by demonstrating a high degree of professionalism and discipline. Spare no effort when training your men and women... But always have their safety at heart."

He reminded the graduands to "lead wisely" and earn the respect of the men who will eventually be under their command.

"It's been an intense nine months, a tough but fruitful experience," said Officer Cadet (OCT) Karthik Ponnambalam of his training. Recalling his stint at the Air Force Training Command (AFTC), OCT Karthik spoke of the initial difficulty he had at radar controls. "It's a very realistic system that we train on and not being able to master it initially really made me feel down," he said.

"But after my instructor Captain Johnny spoke to me and shared his personal experience of air traffic control, I was encouraged and soldiered on," he added. OCT Karthik did not only bounce back from that low, but went on to receive the Best in Air Weapon Control award. He has signed on as a Regular with the Singapore Armed Forces (SAF) and will head to Tengah Air Base as an air traffic controller in May after he completes advanced training at the AFTC.

For OCT Lee Jia Rong, the friendships and bonds forged during the nine-month Officer Cadet Course is something he will not forget for a long time to come. "The level of camaraderie we have achieved in such a short time is only possible in the Army," he said, citing the tough training that each and everyone had undergone together.

Of his eventual posting as an officer of the Armour formation, OCT Lee let on that while he felt slightly nervous, he was confident that his training had prepared him well. "This is not an end but a beginning of a continuous learning journey. After all, I'm still a new officer and have a lot to learn from more experienced people in the Singapore Armed Forces (SAF)," added the humble young recipient of the Sword of Honour (Armour).

Agreeing with him was OCT Muhammad Faroz who said he had "grown wiser" after the course. "I've learnt how to motivate my men and make better decisions," he said, adding that he had also learnt to be more aware of the impact of his decisions.

"As an infantry officer, it's not just about planning but also how I interact with my men," he said. OCT Faroz also cited the emphasis on combat effectiveness during the course. "Making us take on various roles during training has made us think deeper, harder and further to include consequences and impact on the unit's morale," he added. For his good performance during the course, OCT Faroz received the Infantry Sword of Merit.

The newly-commissioned officers will go on to assume command, instructional or staff appointments in the SAF.

Also present at the parade were Deputy Prime Minister and Minister for Defence Teo Chee Hean, members of parliament, senior Ministry of Defence officials and SAF officers. The graduands' families and friends were also present to share in their joy.