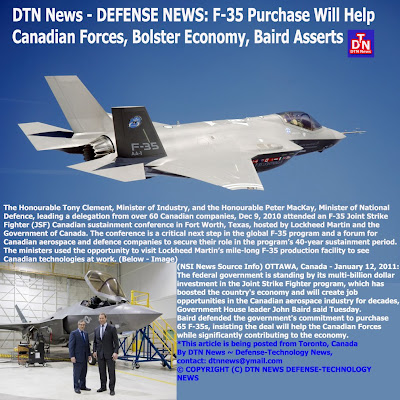 Baird defended the government's commitment to purchase 65 F-35s, insisting the deal will help the Canadian Forces while significantly contributing to the economy.

"It's the right thing to do and our government is committed to seeing this through," Baird said of the planned purchase, which is estimated to be at least $14 billion, while touring MDS Aero Support Corporation, an Ottawa-based engineering organization involved with the development of fighter jet engines.

His comments come a week after the U.S. government announced that the development of a variant of the F-35 ordered by the Marine Corps will be put on a two-year "probation" due to "significant testing problems."

The government has poured $168 million into the JSF program since joining the U.S.-led partnership in 1997 in a plan to replace Canada's aging fleet of CF-18s.

"We're seeing contracts worth more than $350 million being awarded to Canadian contractors, research laboratories and universities in every part of the country. That means we've already seen a two-to-one return on our investment," Baird said.

Baird said joining the program will provide Canadian companies with access to $12 billion in potential work, from manufacturing and assembling parts, to servicing and repairs over a 40-year period.

Liberal MP and industry critic Marc Garneau said the $12 billion estimate is based on a "very optimistic" sale of at least 5,000 F-35s, although he said he believes there is "no chance" of selling more than 3,300.

The Marine Corps' F-35 variant is designed for short takeoffs and vertical landings while the version Canada has ordered is designed to take off and land on conventional airfields. A third variant is specialized for deployment on aircraft carriers.

At the briefing to discuss cuts in military spending, U.S. Defense Secretary Robert Gates said that the Marine Corps model has been put on hold for two years and could be cancelled. The other two versions — to be built by the U.S. firm Lockheed Martin — are still "proceeding satisfactorily," he said.

Garneau said the Conservatives are "shortchanging" Canada's aerospace industry by purchasing the 65 stealth jets without an open competition, which would have ensured a better deal for taxpayers because companies would have fought for contracts. If the government negotiated guaranteed contracts for the purchase, more jobs would have been secured, he suggested.

The deal the Conservatives struck with the F-35s is that Canadian companies do not get traditional work guarantees for the 65 planes, but will receive access to bidding on supply contracts for planes being manufactured for 10 countries in the program, including Australia, Denmark and Italy.

Garneau said aerospace industry representatives are also convinced the contract was awarded without competition. The Conservatives have denied this accusation.

"If the government had a competition, it would've been better — more jobs, less taxpayer money. There are no guarantees with this approach," Garneau said.

In his speech, Baird said Canada's membership in the JSF program will provide Canadian companies, such as MDS, with access to competitive opportunities and establish long-term relationships with foreign countries.

During Baird's tour, MDS chief executive officer, Kevin Fitzgerald, said the company was invited to participate in the JSF program in 2001.

"It became apparent, however, during this competition that in the American market, we were not on a level playing field," Fitzgerald said. The company supplies specialized equipment to support the development of the vertical LiftFan used on one of the engine variants of the F-35s.

Fitzgerald said the company was "denied opportunities to even bid on other F-35 program work," although he said he believes Canada's current involvement will even the competition.

But Garneau said that there will be "lots of pressure" to keep jobs in the U.S. as the country grapples with its own economic recovery and shaky employment rates.

The F-35 test program is maintaining pace and has completed its 500th flight. The notable flight was achieved by the BF-04 STOVL variant on Thursday November 18 at NAS Patuxent River.
Read more...

Good progress is being made in F-35 flight testing by the CTOL and CV versions. F-35B STOVL mode flights have resumed, but the variant is still behind schedule.
Read more...

The Norwegian Ministry of Defence has announced plans to shift the bulk of its F-35 acquisition start-up from 2016 to 2018. A training unit with up to four F-35 jets will be established in 2016.
Read more...

The National Guard's first F-35 pilot has arrived at his new unit and is ready to take on the Air Force's newest fifth-generation jet fighter.
Read more...

Maj. Matt Hayden and Mr. Alan Dykhoff are part of the team at Edwards who test and verify the Lockheed Martin-built F-35 aircraft performs as advertised.
Read more...

The Government of Canada announced plans to acquire the Lockheed Martin F-35 Lightning II as the country's next-generation fighter aircraft. The F-35 will replace Canada's fleet of CF-18 Hornets that entered service in the early 1980s.
Read more...