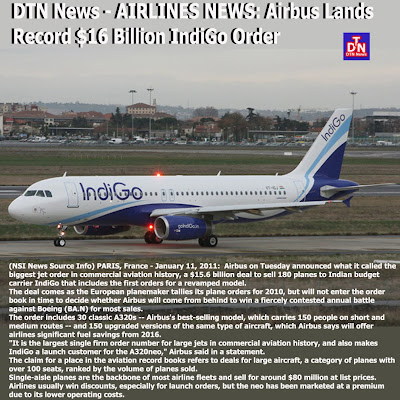 The deal comes as the European planemaker tallies its plane orders for 2010, but will not enter the order book in time to decide whether Airbus will come from behind to win a fiercely contested annual battle against Boeing (BA.N) for most sales.

The order includes 30 classic A320s -- Airbus's best-selling model, which carries 150 people on short and medium routes -- and 150 upgraded versions of the same type of aircraft, which Airbus says will offer airlines significant fuel savings from 2016.

"It is the largest single firm order number for large jets in commercial aviation history, and also makes IndiGo a launch customer for the A320neo," Airbus said in a statement.

The claim for a place in the aviation record books refers to deals for large aircraft, a category of planes with over 100 seats, ranked by the volume of planes sold.

Single-aisle planes are the backbone of most airline fleets and sell for around $80 million at list prices. Airlines usually win discounts, especially for launch orders, but the neo has been marketed at a premium due to its lower operating costs.

Airbus launched the "A320neo" -- an upgraded version of its best-selling A320 150-seat workhorse -- in December but had not so far won anything more than messages of support.

Airbus says airlines will benefit from 15 percent fuel savings by choosing the upgraded "neo" model, which will have state-of-the-art engines and upward-sloping wingtips.

Boeing (BA.N), the world's second-largest planemaker behind Airbus, has expressed doubts over whether airlines want such a model when it believes an all-new airliner, with even better performance, might be available around the end of the decade.

IndiGo, which had already ordered 100 Airbus A320s in 2005, said last August it planned to buy 150 more planes over two to three years as it looks to fly international routes.

IndiGo will have completed five years of operations in August 2011, which makes it eligible to fly overseas routes.

India's aviation sector, which has close to a dozen carriers, is expanding sharply as the booming economy revives the market for air travel.

The "neo" order will spark a showdown between Pratt & Whitney, a unit of United Technologies (UTX.N), and CFM International, jointly owned by General Electric (GE.N) and French group Safran (SAF.PA), for the right to supply engines.

IndiGo will select the engines at a later date, Airbus said.

*5 planes are on short term lease with Turkuaz Airlines and Etihad Airways.

As of December 2010 the average age of the IndiGo fleet was 2.1 years. 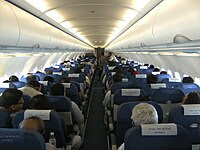 The interior of an IndiGo A320

IndiGo placed an order for 100 Airbus A320 family aircraft during the 2005 Paris Air Show. The total order was worth US $6 billion, one of the highest by any domestic carrier during the show. The carrier has set a target of serving approximately 30 Indian cities by 2010 with a fleet size of 40 A320 aircraft. The airline will receive all 100 A320 family aircraft by 2015-2016. The Indian Government has approved the airline's aircraft import plan "in principle".

IndiGo has plans to buy additional 150 aircraft for deliveries before 2025. They signed a Memorandum of Understanding for 180 eco-efficient Airbus A320 at 11th January 2011.