DTN News - BREAKING NEWS: Australian Floods - Brisbane Homes Evacuated As Crisis Escalates
* The devastating Queensland floods that have claimed at least nine lives in the past 24 hours and left 59 missing have hit the state's capital Brisbane, where thousands of residents have been warned to evacuate their homes.

The emergency escalated quickly during the day, with more than 30 low-lying suburbs on high alert and inner-city suburbs including West End and Fortitude Valley being evacuated.

TOOWOOMBA, AUSTRALIA - JANUARY 10: (EDITORS NOTE: Best resolution currently available) Debris and an overturned car is seen in central Toowoomba between 15:00 and 17:00 hours AEST following a flash flood which ripped through the town centre on January 10, 2011 in Toowoomba, Australia. 8 people so far have been confirmed dead in towns in the Lockyer Valley and over 70 are still reported missing. The Defense Force will today join the search and rescue mission as heavy rains are predicted to continue to inundate the region.

TOOWOOMBA, AUSTRALIA - JANUARY 10: Overturned and piled up cars are seen in central Toowoomba between 15:00 and 17:00 hours AEST following a flash flood which ripped through the town centre on January 10, 2011 in Toowoomba, Australia. 8 people so far have been confirmed dead in towns in the Lockyer Valley and over 70 are still reported missing. The Defense Force will today join the search and rescue mission as heavy rains are predicted to continue to inundate the region.

TOOWOOMBA, AUSTRALIA - JANUARY 11: Damaged furniture is seen piled up on the footpath on January 11, 2011 in Toowoomba, Australia. 8 people so far have been confirmed dead in towns in the Lockyer Valley and over 70 are still reported missing after devastating floods inundated the region. Evacuations are underway in several towns and suburbs in and around Brisbane with residents and emergency services fearing the worst floods in over 35 years.

As the Brisbane River breached its banks in several place to engulf parks and footbridges and heavy rain continued to fall on the metropolitan area, the city's main roads and public transport system quickly became clogged as hundreds of people rushed to get to higher ground.

Early estimates suggested that more than 9,000 homes could be inundated when the Brisbane River peaks at 12ft over the next two days. Campbell Newman, the Brisbane mayor, said 6,500 homes and businesses could experience seriously flooding.

By the afternoon, a disaster zone had been declared for south-east Queensland, giving police extra powers to force residents to evacuate if necessary.

Brisbane, which is Australia's third largest city and is home to two million people, was under siege on four fronts, with runoff from the flash flooding in the Lockyer Valley, large volumes of water running down the Brisbane River, a king tide and heavy rain combining to create what Julia Gillard, the prime minister, called "a very dire situation".

The threat to Brisbane comes after an inland tsunami swept through Toowoomba, 77 miles to the west of the Queensland capital, on Monday.

Among the dead were four children and entire families were among the missing.

Outside Brisbane, towns to the west and north were isolated by the floodwaters and rescue efforts were being hampered by continuing bad weather. About 300 people were being airlifted from the Lockyer Valley town of Forest Hill and the outlook was poor for the town of Ipswich, where water was rising, affecting 400 streets.

Ms Gillard has said the events unfolding in Queensland were shocking and warned the nation to brace for the death toll to rise.

She fielded questions about whether the region had been properly prepared for the deluge. But government meteorologists have said that the flash flooding was almost impossible to predict.

Anna Bligh, the premier of Queensland, fought back tears as she described the events as "our darkest hour".

"The flood crisis has deepened seriously over the past several hours," she said.

"This weather may be breaking our hearts but it will not break our will."

Ms Bligh warned that the entire city of Brisbane would be affected with workplaces and shopping centres closed. She urged residents to stay off the roads unless absolutely necessary and warned that the death toll could double.

"We are facing one of our toughest ever tests... now is not a time to panic, it is a time to stick together," she said.

As the flooding sweeps across southeast Queensland, bushfires are raging in Western Australia, threatening scores of properties. 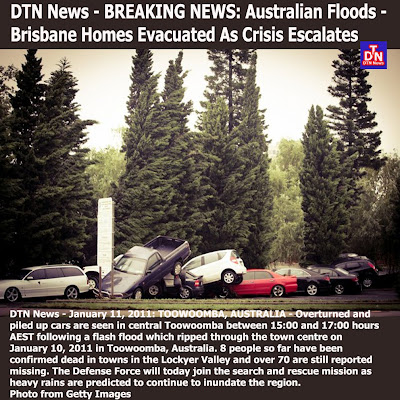 Australian floods: Nine dead and as many as 70 missing as floods threaten Brisbane

The Guardian - ‎2 hours ago‎
Nine people are dead and more than 70 are missing after flooding in the Australian state of Queensland devastated several towns and sent torrents raging ...
Video: Dramatic pictures of Queensland flooding

Telegraph.co.uk - Bonnie Malkin - ‎19 minutes ago‎
Steven and Sandra Matthew were helping their children climb into the roof cavity of their home to escape the flashflood when they were swept away. ...

Thoughts are with those in Qld: Keneally

Sydney Morning Herald - ‎6 hours ago‎
"Overnight and this morning, it has become clear that Queensland is in the grip of one of the most devastatingAustralian floods in recent years," the ...
*This article is being posted from Toronto, Canada By DTN News ~ Defense-Technology News, contact: dtnnews@ymail.com