Source: DTN News - - This article compiled by Roger Smith from reliable sources By Joby Warrick January 11, 2011 - Sydney Morning Herald
(NSI News Source Info) ABU DHABI- January 11, 2011: The US Secretary of State, Hillary Clinton has acknowledged it will take years to undo the damage caused by the WikiLeaks revelations, likening her recent travels to an extended ''apology tour'' to reassure allies who suffered embarrassment or worse because of the disclosures. 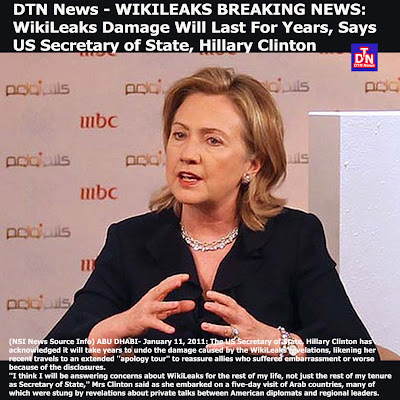 ''I think I will be answering concerns about WikiLeaks for the rest of my life, not just the rest of my tenure as Secretary of State,'' Mrs Clinton said as she embarked on a five-day visit of Arab countries, many of which were stung by revelations about private talks between American diplomats and regional leaders.

Mrs Clinton, who is on her second Middle East trip in less than a month, said she had sought to ''affirmatively raise'' the WikiLeaks issue in meetings with Arab officials to tackle the problems head-on.

Some of Iran's Arab neighbours were particularly aggrieved by leaked State Department cables that showed them privately urging the Obama administration to take a harder line against Iran's nuclear ambitions.

Mrs Clinton said she had joked to one of her aides that she needed a tour jacket, similar to the ones used by rock bands, that would have a ''big picture of the world and would say 'the Apology Tour''' on it.

Although the intensity has abated somewhat, the fallout from the WikiLeaks affair ''is still in the atmosphere'', she said.

In Iceland, the US ambassador has been summoned to explain why US officials are trying to gain access to the Twitter account of an Icelandic MP and former WikiLeaks collaborator.

Birgitta Jonsdottir revealed last week that the US Justice Department had asked Twitter to hand over her information. The US authorities are trying to build a criminal case against the website after its huge leaks of classified US information.

''[It is] very serious that a foreign state, the United States, demands such personal information of an Icelandic person, an elected official,'' the Interior Minister, Ogmundur Jonasson, told the Icelandic broadcaster RUV. ''This is even more serious when put [in] perspective and concerns freedom of speech and people's freedom in general.''

Iceland's Foreign Ministry has demanded a meeting with Luis Arreaga, the US ambassador to Reykjavik. No one at the US embassy in Reykjavik was available for comment.

Ms Jonsdottir is one of the site's contributors whose communications are being investigated by US authorities.

A court order last week revealed that US authorities are also seeking Twitter data from the WikiLeaks founder, Julian Assange, the Dutch hacker Rop Gonggrijp and Bradley Manning, the US serviceman accused of stealing hundreds of thousands of sensitive government cables published by WikiLeaks.

Separately, Mrs Clinton appeared to play down recent statements by Israeli officials that seemed to suggest Iran may not be as close to a nuclear weapons breakthrough as had been widely feared.

Noting Iran's recent technical stumbles in attempting to enrich uranium, a prominent Israeli intelligence official suggested it would take Iran at least three more years to build the bomb, compared with earlier estimates of one or two years.

''The timeline is not so important as the international effort to try to ensure that, whatever the timeline, Iran is not pursuing nuclear weapons,'' Mrs Clinton said. ''I don't know that it gives much comfort to someone who is living in the Gulf - or living in a country that Iran has vowed to destroy - that it is one year or three years.''

She said the Obama administration was committed to an ''intensive international effort … highlighted by sanctions'' to persuade Iran to change its course.

Assange due in UK court over Swedish extradition

WikiLeaks disastrous for US diplomacy: Singapore

Email this story
The Guardian

WikiLeaks founder back in court over extradition

Bloomberg - ‎4 minutes ago‎
By AP LONDON (AP) — The founder of secret-spilling website WikiLeaks was back in court Tuesday as part of his fight to avoid being extradited to Sweden, ...

CBS News - Jonathan V. Last - ‎4 hours ago‎
An intriguing aspect of the WikiLeaks saga is the story behind the arrest and public unmasking of Private Bradley Manning. In late May of last year, ...
Revenge of the nerd The Daily Evergreen
WikiLeaks: Lessons from the Manning-Lamo Chat Logs Boston Globe (blog)
Facebook and Google under pressure over WikiLeaks Independent
Los Angeles Times
all 17 news articles »
GOOG

US journalists back away from WikiLeaks founder

The Moscow Times - ‎13 hours ago‎
... Sergei Kupriyanov declined immediate comment on the documents, part of the 251287 US embassy cables released to news organizations by WikiLeaks. ...

Wikileaks may close down - Assange

The Voice of Russia - ‎5 minutes ago‎
The whistleblower website Wikileaks may close up shop over financial woes after a number of money-transfer systems closed down its accounts, ...