Source: DTN News - - This article compiled by Roger Smith from reliable sources By Pamela Constable Washington Post Foreign Service Tuesday, January 11, 2011
(NSI News Source Info) KARACHI, Pakistan - January 11, 2011: The assassin has been showered with rose petals, his home has become a shrine to the faithful and thousands of supporters have marched in the streets, praising him as a heroic defender of Islam. 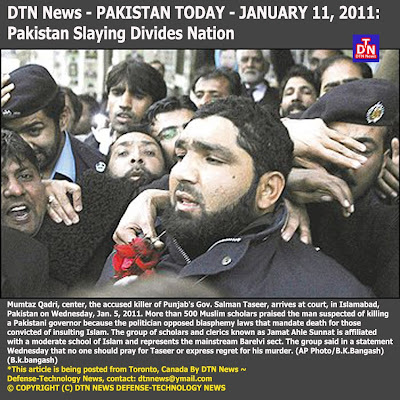 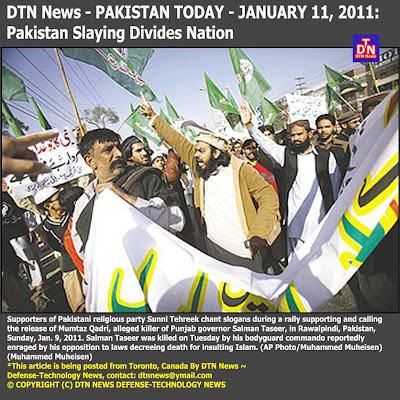 Mumtaz Qadri, 26, pleaded guilty in a Pakistani court Monday to murdering the governor of Punjab province, Salman Taseer, because of the governor's outspoken opposition to Pakistan's harsh blasphemy law, which makes it a capital crime to criticize the prophet Muhammad.

Qadri, a policeman who was assigned to protect Taseer, shot him 26 times Jan. 4, apparently in response to the governor's public comments on blasphemy. Police officials and Qadri's lawyer said he told the judge in Rawalpindi that he had acted alone and was not influenced by any religious group. The hearing was held one day early to prevent his fans from mobbing the court.

But Qadri's act, while condemned by some members of Pakistan's small moderate elite, has quickly united and emboldened a broad spectrum of Islamic groups across the country. It has exposed both the sharp schisms here and the weakness of Pakistan's political leaders to counter the growing popularity of radical Islam.

The fallout from the murder, which came amid the near-collapse of the country's ruling coalition, has also raised new questions about the viability of Pakistan's democratic order at a time when Washington has embraced the government as a critical partner in the fight against the Taliban.

"Mumtaz Qadri sacrificed himself to protect the sanctity of our prophet, and every one of us here is ready to do the same thing," said Abdul Majid, a seminary student who was among tens of thousands of supporters who rallied in this huge port city Sunday, demanding that the country's controversial blasphemy law be preserved.

Many people at the march were Islamic activists and seminary students who hoisted posters of Qadri and carried flags of religious parties, including two banned Sunni militant groups. The rally was peaceful, but hundreds of participants shouted provocative and emotional chants, including "Life to Mumtaz Qadri, death to Salman Taseer, death to all blasphemers."

The slaying of Taseer, 66, a liberal politician who had condemned the blasphemy law and the death sentence against a Christian peasant woman accused of insulting the prophet, has shaken the nation.

Beyond Qadri's crime, it was the reaction to it - the tepid and evasive comments by various officials, the cowed silence of affluent and professional groups, and the unabashed cheers from unexpected as well as predictable quarters - that has stunned and frightened the nation's small Westernized elite.

Blasphemy is a highly sensitive issue for many Muslims in Pakistan, a deeply impoverished country of 180 million. But the blasphemy law, adopted in the mid-1980s during the Islamist dictatorship of Gen. Zia ul-Haq, has also been misused and manipulated to target minority groups, including Christians and Shiite Muslims, and to settle personal scores.

In recent months, Parliament had begun gingerly discussing ways to make the law less punitive and more precise. Charges can be made on absurdly petty grounds, such as the recent case of a doctor who was accused of blasphemy because he threw away the business card of someone named Mohammed.

In the wake of Taseer's murder, however, the government of President Asif Ali Zardari has rapidly backpedaled on any idea of reforming the law.

Sherry Rehman, a liberal legislator from Karachi who recently introduced a bill to amend the blasphemy law, has been politically isolated since Taseer's murder, threatened by protesters and declared a non-Muslim by one Islamic leader. She is now in seclusion at her home, under special police guard.

"I am amazed at the ferocity of the onslaught," Rehman said Sunday. "I was trying to find a middle ground, but now no one wants to touch the issue. I think this retreat is going to set the country back for years to come."

Rehman was joined by a potentially influential voice for Pakistani liberalism on Monday when Bilawal Bhutto Zardari - the son of Zardari and assassinated former prime minister Benazir Bhutto - called those celebrating Taseer's death "the real blasphemers" and pledged to defend minority rights. Bhutto Zardari is considered the eventual heir to his family's political legacy, although he lives in Britain and, at 22, is not yet actively engaged in politics.

Although few Pakistanis were surprised to see extremist Islamic groups demonizing Taseer, many were startled when leaders of the Barelvi sect, known as a moderating force in Sunni Islam, declared that Taseer did not deserve to be mourned as a Muslim. Analysts said Barelvis might be using the blasphemy issue to compete with the dominant, and more radical, Deobandi sect.

"The silence of the so-called liberal establishment is criminal," said Haider Abbasy, an official of the secular Muttahida Qaumi Movement party that dominates Pakistan's largest city. "We have been warning about the Talibanization of Karachi for a long time, and people always accuse us of having a political agenda. But we are sitting on a ticking time bomb."

The Guardian - ‎1 hour ago‎
If the governor of Pakistan's largest province can be shot dead by a policeman assigned to protect him in broad daylight in a market in the federal capital, ...
Video: Thousands rally in Pakistan over blasphemy law

Sify - ‎1 hour ago‎
Karachi: Pakistan coach Waqar Younis hoped that his team will be able to play some controversy-free cricket once a decision is taken by an independent ...
Waqar hopes for good future sportal.co.in
all 20 news articles »

Aljazeera.net - ‎12 hours ago‎
Pope Benedict XVI has called for Pakistan to repeal its anti-blasphemy law and demanded that governments in predominantly Muslim countries do much more to ...
Video: Benedict XVI baptizes 21 babies in Sistine Chapel

Terror can't be ignored for friendly ties with Pakistan: Krishna

Economic Times - ‎57 minutes ago‎
"If they (Pakistan) can fulfil their assurances (regarding terror outfits), India is willing to go more than half the way to talk to them. ...

Indians face problem in meeting relatives in Pakistan due to non-clearance of ...

Sify - ‎29 minutes ago‎
Residents of Jammu and Kashmir have been facing problems in meeting with their relatives in Pakistan due to non-clearance of papers in Islamabad. ...
Shawl welcomes India Pakistan dialogue - Associated Press of Pakistan
INDIA-PAKISTAN: The Rules Strategy Page
all 10 news articles »