DTN News - DEFENSE NEWS: China - A Force Fit For A Superpower
* The technology and firepower of the People’s Liberation Army are growing so fast that observers are no longer curious but concerned, says Malcolm Moore.

7:28PM GMT 10 Jan 2011 - Telegraph.co.uk
(NSI News Source Info) TORONTO, Canada - January 11, 2011: It has been a month to remember for the top brass of China’s People’s Liberation Army. While other armies fret about their funding, China’s generals have unveiled three major new weapons that could challenge the military supremacy of the United States and provide the firepower to underline China’s superpower status. 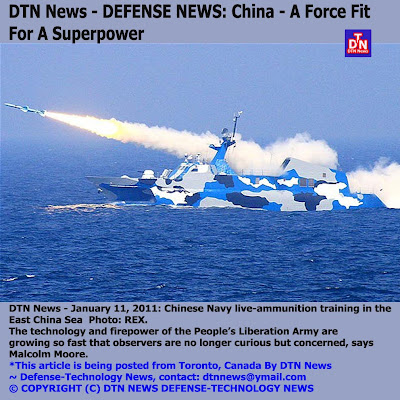 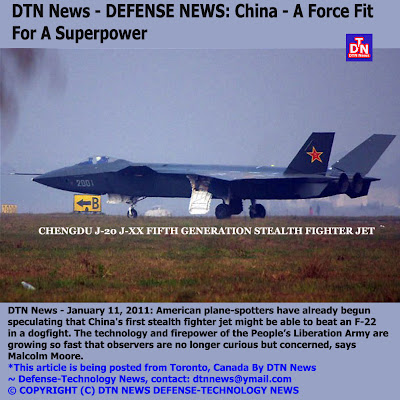 In a dry dock in the northern city of Dalian, smoke has begun to billow from the chimneys of the Shi Lang, a hulking Soviet-era ship that China bought from Russia and has refitted to become its first aircraft carrier. Named after a Qing dynasty admiral, the carrier is slated to make its maiden voyage later this year, four years ahead of schedule. Five more aircraft carriers could bolster the Chinese fleet further over the next decade.

Meanwhile, at an air base in the central city of Chengdu, China’s first stealth fighter jet has been spotted taxiing along a runway. It has yet to take off, but American plane-spotters have already begun speculating that it might be able to beat an F-22 in a dogfight. Finally, at a command bunker in the north of Beijing, the Chinese Second Artillery Corps controls the jewel in the crown – a new missile that could sink a US aircraft carrier, the first such weapon in the world. The Dong Feng (or East Wind) 21D missile is now “operational”, according to Admiral Robert Willard of the US Pacific Command, which will now have to think twice before committing a $20 billion (£12.8 billion) aircraft carrier and its 6,000 crew anywhere within 900 miles of the Chinese coast.

The unveiling of the new weapons could not have been better timed. Tomorrow, the US defence secretary, Robert Gates, is due to visit the tall white skyscraper that serves as the Second Artillery’s headquarters. Mr Gates, who has admitted that US intelligence has underestimated the speed of China’s progress, will be able to see the PLA’s array of nuclear and ballistic missile options for himself.

The transformation of the PLA, from Chairman Mao’s Red Army into a modern fighting force, began in the wake of the first Gulf War, when America’s precision missiles impressed upon Beijing that modern warfare no longer depended on having the biggest army. Ever since then, the PLA has been shedding troops, from some three million during the 1990s to 2.3 million currently. Xu Guangyu, a senior military analyst, predicted that troop numbers would keep falling, to 1.5 million – “Around the same size as the US and Russian armies,” he said.

But while troop numbers have fallen, the quality of the soldiers has risen, said Mr Xu. Almost 80 per cent of officers are now graduates, and a full two-thirds of China’s defence budget is spent on salaries and training. Meanwhile, a stinging submission at the hands of the US in 1996, when Bill Clinton sent two aircraft carrier strike groups into the East China Sea to support Taiwan during a regional spat, has provoked the PLA into upping its firepower. According to the Pentagon, China has the world’s “most active land-based ballistic and cruise missile programme”. A battery of more than 1,100 short-range missiles faces Taiwan, while medium and longer-range missiles, many bought from Russia, can carry nuclear or conventional warheads to anywhere within 4,000 miles of China, giving Beijing the ability to knock out every US air base in the Pacific.

China’s economic miracle has paid for the munitions, with the PLA’s official budget increasing more than fivefold from $14.6 billion in 2000 to $78.6 billion this year. Unofficially, the spending is thought to be far higher, at $150 billion, with China’s leaders keeping many of the PLA’s deals off the books in order to avoid alarming the rest of the world. And while the sum is still just a fraction of the US budget – Mr Gates has allocated $588 billion for “non-war” military spending this year, after trimming $78 billion of cuts – China has spent the money prudently, focusing on areas of US weakness.

China’s submarine fleet now boasts 65 vessels, and by 2030, according to the Kokoda Foundation, an Australian think tank, the total could rise to between 85 and 100, more than the US and enough to establish an edge in the Pacific. China has also integrated the skills of its military and civilian computer hackers, launched several reconnaissance and guidance satellites, and installed arrays of new radars and underwater sensors to ring its territory.

“There are a number of areas where the PLA has adopted approaches that differ significantly from the US’s approach,” said a Pentagon report to Congress last month. “Examples include the heavy reliance on ballistic and cruise missiles, rather than stealth aircraft, to attack ground targets inside heavily defended airspace; an array of systems to attack intelligence, communications and navigation satellites [and] an emphasis on offensive and defensive electronic warfare.”

While the PLA’s generals have been careful to tone down their nationalistic rhetoric in recent years, dropping the suggestion of an imminent invasion of Taiwan, the army is behaving with more swagger, at least in its own backyard. China insists its only goal is to safeguard “regional peace and stability”, but it has dramatically increased its penetrations of Japanese airspace, resulting in Japanese fighter jets being scrambled 44 times in the past year, double the total for 2006, according to the Asahi Shimbun newspaper.

Admiral Mike Mullen, the chairman of the US Joint Chiefs of Staff, said: “A gap as wide as what seems to be forming between China’s stated intent and its military programmes leaves me more than curious about the end result. Indeed, I have moved from being curious to being genuinely concerned.”

The PLA does, however, have a long list of fundamental weaknesses that have been pointed out by critics both in China and abroad. Its biggest failing is that it cannot, yet, produce the reliable jet engines it needs for its fighters, having to rely on Russia. That relationship was strained, in 2004, when Moscow discovered that China had copied one of the jets it had advance-ordered and put it into production. “China’s army should not have to rely on others or have to buy its equipment,” said Liang Guanglie, the defence minister, despairingly.

Meanwhile, the PLA’s Jin-class nuclear submarine is said, by the US Office of Naval Intelligence, to be noisier than the submarines built by the Soviets 30 years ago. China’s fighter pilots are no match for US Top Guns. A shortage of foreign naval bases makes it difficult for China to maintain ships on long missions. Sailors who took part in exercises against Somali pirates in the Gulf of Aden were reported to have run short of water and fresh food.

And perhaps most reassuringly, the new Dong Feng “carrier killer” missile is impaired by China’s undeveloped missile guidance system. While Beijing can launch the deadly missile, it is not clear it can actually hit a ship. Since US satellites would detect the missile upon launch, an aircraft carrier would have enough warning to move several miles out of the way.

For now, Beijing wields enough power to keep the US in check in the Pacific and to discourage Taiwan from relying too heavily on American support. In the future, the Pentagon believes that the PLA could extend further into the Pacific, using its fleet to control shipping lines and oil concessions. The “pace and scale” of the PLA’s modernisation has been “broad and sweeping”, the Pentagon said. But, for now, China’s modern army “remains untested”.