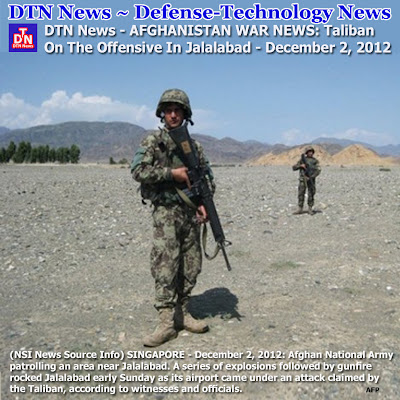 Why are the Taliban on the offensive? The reply is straightforward, President Obama’s Afghan strategy is not working. The Taliban are gaining confidence from increased news coverage and political strength from Iran and other elements, who are supposed to be fighting along side the NATO ISAF coalition forces against insurgency. On December 25, 2010, the Taliban are on the offensive attacking NATO ISAF troops with rockets from safe distance near Pakistan border.

Nine attackers were also killed, some blowing themselves up in two vehicles at the perimeter gate of the Jalalabad airport and others shot as they attempted to storm the base, police said.

NATO helicopters fired on the insurgents as they followed up the car bombing with rocket-propelled grenades, mortars and small arms fire.

The Taliban claimed insurgents had entered the airport, which is close to the eastern border with Pakistan, but this was denied by NATO's International Security Assistance Force (ISAF).

"Insurgents including suicide bombers attacked the perimeter of the Jalalabad air base this morning," a spokesman told AFP. "None of the attackers succeeded breaching the perimeter.

"I can confirm that there were helicopters involved in the coalition response to the attack.

"A number of ISAF forces were wounded," he added, noting that it was ISAF policy not to disclose the number of those injured.

The airport complex has multiple layers of security, with the NATO base set well back from the first entrance, which an Afghan official said had been breached.

"First there was a car bombing next to the entrance followed by gun attack by the insurgents," a senior Afghan security official said. "They couldn't reach NATO forces and they were killed in the area between the first and second gates." 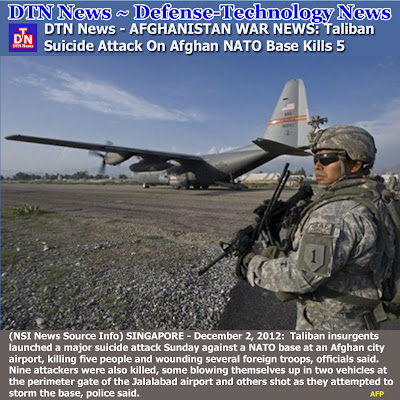 The Taliban claimed their militants had entered the airport and caused heavy casualties.

"First a fedayee (suicide bomber) mujahid... detonated a car bomb causing the enemy heavy casualties and losses and removed all the barriers," the Taliban said on their website.

"After the attack other fedayee mujahids entered the base... and started attacking the invading forces in the base."

The hardline Taliban Islamists have waged an 11-year insurgency against the Afghan government, which is backed by 100,000 NATO troops, since being overthrown in a US-led invasion for harbouring Al-Qaeda leader Osama bin Laden.

The airport has come under attack on two previous occasions this year.

The airport also came under attack on April 15, when the Taliban launched their spring offensive with a series of commando-style assaults across Afghanistan.

The latest assault comes as the usual summer fighting season should be drawing to a close and shows that the insurgency remains resilient as NATO forces prepare to withdraw in 2014.

With the end of the US "surge" in Afghanistan, the Taliban have survived the biggest military onslaught the West will throw at them.

The last of the extra 33,000 soldiers President Barack Obama deployed nearly three years ago left in September, and the vast majority of the remaining NATO force of more than 100,000 will follow by the end of 2014.

One of the aims of the surge was to put so much pressure on the Taliban that they would come to the negotiating table, but the insurgents called off early contacts in March, accusing the United States of constantly changing its position.

A series of explosions followed by gunfire rocked the eastern Afghan city of Jalalabad early Sunday as its airport came under an attack claimed by the Taliban, witnesses and officials said.


The Taliban said in a telephone call to AFP that they had launched an assault including a suicide bombing on the airport complex, which contains a major NATO base.

Militants had entered the airport, they said. An Afghan government official confirmed that clashes had taken place within the airport complex.

A guard said that after the initial huge explosion the airport had come under fire from rocket-propelled grenades, mortars and small arms.

There was no immediate word on casualties.

The hardline Taliban Islamists have waged an 11-year insurgency against the Afghan government, which is backed by 100,000 NATO troops, since being overthrown in a US-led invasion for harbouring al-Qaeda leader Osama bin Laden.

A spokesman for NATO's International Security Assistance Force confirmed that there had been "multiple explosions in the vicinity of Jalalabad airport", but had no further details.


DTN News - DEFENSE NEWS: Top US General Visits Troops In Afghanistan
(NSI News Source Info) MARJAH, Afghanistan - December 25, 2010: The top U.S. and NATO commander in Afghanistan crisscrossed the country on Saturday, visiting coalition troops on Christmas at some of the main battle fronts in a show of appreciation and support in the tenth year of the war against the Taliban.Gen. David Petraeus started his Christmas visit by traveling by helicopter
from the capital, Kabul, to the northern province of Kunduz, telling troops with the U.S. Army's 1-87, 10th Mountain Division that on this day, there was "no place that (he) would rather be than here" where the "focus of our effort" was.
The northern part of the country has seen increased fighting, with the Taliban increasing their attacks as NATO focuses its sights on the militant movement's southern strongholds. Petraeus was briefed on the situation in the region by German Maj. Gen. Hans-Werner Fritz, the commander of NATO's northern regional command. 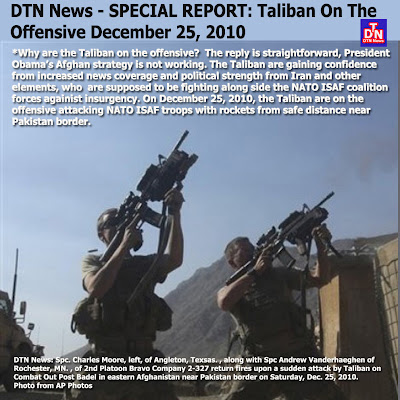 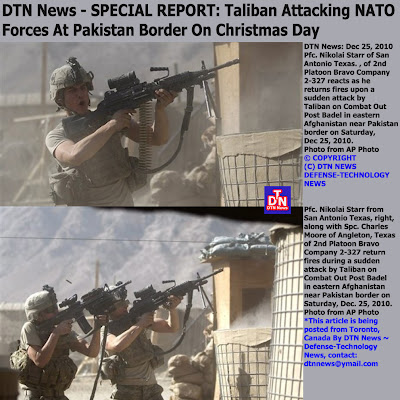 Petraeus handed out commemorative coins to troops who had served for 3 or more years since the Sept. 11, 2001 attacks, and awarded several medals, including three purple hearts. He then went by helicopter over desert mountain peaks to the western province of Farah, where the Italian army's 7th Alpini is stationed.
The U.S. general's visit coincided with one by Gen. Vincenzo Camporini, the Italian chief of defense general staff. Petraeus congratulated the Italian soldiers on the "progress that has been achieved in the first few months that this unit has been here."
Petraeus's next stop was the Taliban stronghold of Marjah in Helmand province, scene of some of the heaviest fighting recently between the Taliban and NATO-Afghan forces.
Marjah has become a symbol of the problems facing NATO troops in Afghanistan. More than 7,000 U.S.-led NATO ground troops launched a nighttime invasion of the region of farming hamlets last February to rout insurgents and cut off their income from the drug trade. NATO officials said the effort would pave the way for the Afghan government to move in aid and start delivering public services.
Marine Maj. Gen. Richard Mills on Dec. 7 declared that the battle in Marjah was "essentially over." But the campaign took longer than NATO officials had hoped, and illustrated the complexity of trying to wrest control of an area where Taliban influence remained strong.
Efforts to create a civilian government in Marjah have been painfully slow, and U.S. troops struggled against roadside bombs and sniper attacks from an enemy that could blend in with the local population.
It is not known when U.S. troops could be withdrawn in significant numbers from Helmand as heavy fighting continues elsewhere in the area, including the Sangin district where Marines took over from British forces.