DTN News - CHINA DEFENSE NEWS: China Bulk Inventory of Attack Helicopters Are The Z-10
*DTN News has enhanced and further elaborated on the subject of the relevant topic respectively for the benefit of the readers with due respect to the author of this article ~ "China Goes All In With The Z-10" 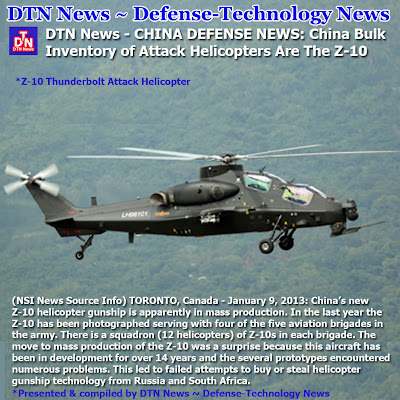 (NSI News Source Info) TORONTO, Canada - January 9, 2013: China’s new Z-10 helicopter gunship is apparently in mass production. In the last year the Z-10 has been photographed serving with four of the five aviation brigades in the army. There is a squadron (12 helicopters) of Z-10s in each brigade. The move to mass production of the Z-10 was a surprise because this aircraft has been in development for over 14 years and the several prototypes encountered numerous problems. This led to failed attempts to buy or steal helicopter gunship technology from Russia and South Africa.

Two years ago some of the Z-10 prototypes were sent to Chinese Army aviation units for field testing. While not a failure, the newer and lighter Z-19 was apparently seen as a better candidate for mass production. Work continued on the Z-10 because the Z-19 is basically an armed scout helicopter. China always wanted something more like the American AH-64 Apache. That would be the Z-10, at least once all the development problems were overcome. The seven ton Z-10 is smaller than the 10 ton AH-64 and also has a crew of two. The Z-10 is armed with 30mm autocannon and can carry up to a ton of rockets or missiles.

For three years now the Z-19 armed scout helicopter has been spotted in the air, most recently painted in military colors. The Z-19 was earlier known as the Z-9W. The Z-19 is yet another Chinese helicopter based on the Eurocopter Dauphin (which has been built under license in China for two decades). The Z-19 is a 4.5 ton, two seat armed helicopter. It can carry a 23mm autocannon and up to half a ton of munitions (missiles, usually). Cruising speed is 245 kilometers an hour and range is 700 kilometers. The Z-19 is basically an upgraded Z-9W.

The helicopter adopts a standard gunship configuration with a narrow fuselage and stepped tandem cockpit with the gunner in the front seat and the pilot in the backseat. The fuselage appears to have a stealthy diamond shaped cross section to reduce RCS. It also have a 5-blade main rotor made of composite material and an AH-64 style 4-blade tail rotor. All the vital areas of the fuselage including the cockpit and fuel tanks are believed to be protected by the armor plates.

It weighs about 5.5 tons and was powered initially by two P&W PT6C-76C turboshaft engines (rated @ 1,250kW each) on the prototypes. However domestic developed engines (upgraded WZ-9) are being used in production batches due to the embargo imposed by the west. Its rotor and transmission systems may have been designed with extensive technical assistance from Eurocopter France and Agusta.

Its main weapon are 8 newly developed KD-10 ATGMs in the same class of American AGM-114 Hellfire. A 23mm cannon is mounted under the chin, aimed via gunner's helmet mounted display. Also up to 8 PL-90 AAMs can be carried against enemy helicopters and slow-moving fixed wing aircraft. Its range can be further extended by external fuel tanks. Similar to AH-64, Z-10 features nose mounted PNVS and TVDS housing FLIR, TV camera, laser range finder and designator. RWR and radar jammer antennas are installed on both sides of the forward and aft fuselage. In addition, two laser warning receivers was installed on top of the pylon tips. The helicopter may have been fitted with an integrated communication/navigation system, a comprehensive ECM suite, IFF, chaff/flare launchers, 1553B data bus, HOTAS and a glass cockpit.

In 2009 it was reported that an "optimized" version (Z-10A?) was under development and expected to enter the mass production. This version is powered by the less powerful WZ-9 engines (~1,000kW) thus was forced to have its weight reduced by eliminating certain less-critical parts such as less armor protection, smaller PNVS/TVDS on the nose similar to that of Z-9WA and a smaller weapon load.

The first batch of 12 Z-10s entered the service with PLA Army Aviation (S/N LH951xx) in late 2010. More Z-10s are entering the service with the Army (S/N LH981xx,961xx, 941xx, 991xx) since late 2011. However some still carry the original PNVS/TVDS installed on the prototypes but are powered by WZ-9 turboshafts. This version also features additional equipment such as anIR jammer (?) installed on the cockpit roof. It has been speculated that Z-10 could be powered by the new WZ-16 turboshaft engine (~1,500kw) in the future.