Source: DTN News - - This article compiled by Roger Smith from reliable sources By Arie Egozi, Tel Aviv - Flight
(NSI News Source Info) TORONTO, Canada - January 9, 2013: The Israeli air force is planning to stage its largest ever multinational exercise, with at least five foreign air forces due to participate. To be mounted from Uvda air base, the manoeuvres are expected to involve "dozens" of different types of combat aircraft, local sources says. 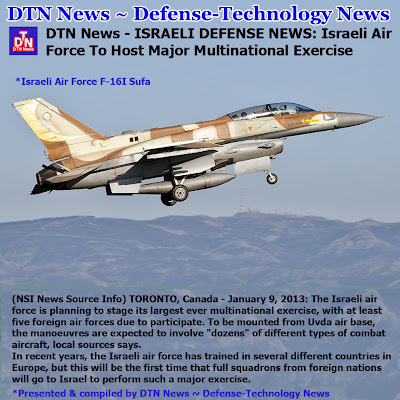 In recent years, the Israeli air force has trained in several different countries in Europe, but this will be the first time that full squadrons from foreign nations will go to Israel to perform such a major exercise.
One air force source says that while the planned exercise may look like a local copy of the US Air Force's "Red Flag" series of exercises, it will differ by including the availability of unspecified "Israeli elements".
In preparation for hosting the multinational activity, the Israeli air force recently performed a major exercise, dubbed "Blue Flag", in which Lockheed Martin F-16 fighters from its "Flying Dragon" squadron acted in the aggressor role.
Israeli sources say many air forces are willing to join the multinational exercise, mainly because of the host nation's recent operational experience. The Israeli air force was heavily involved in the "Pillar of Defense" operation against Hamas militants in the Gaza Strip late last year, with the service having attacked 1,500 targets and used 2,000 weapons across different types.


The Israel Defense Force/Air Force ordered a total of 362 F-16s, from early F-16A/Bs to the latest F-16I. Fifty of these aircraft were surplus USAF aircraft, given to Israel by the US as payment for restraint during the 1991 Gulf War despite Scud attacks. All Israeli F-16s are fitted with custom Israeli electronics.

Israeli F-16s have been used extensively in combat, and scored 47 kills to date. They were also used in the bombing of the Iraq's nuclear reactor in Osirak.

In August of 1978, when the Carter Administration's arms sales restrictions policy had reached its zenith, the government of Israel announced plans to acquire 75 F-16A/B's. The fact that Israel had just signed the Camp David agreements with Egypt, however, had established an Israel-friendly climate in Washington, and the acquisition plans were approved.

The first F-16 deliveries to Israel (all 75 Block 10 aircraft, except for 18 F-16A's and 8 B's that were originally built as block 5 but had already been converted to Block 10) took place under the Peace Marble I Foreign Military Sales program. These planes were originally intended for the Imperial Iranian Air Force, but the demise of the Shah in 1979 and the consequent rise of the Islamic fundamentalist regime caused these planes to be diverted to Israel. They had a number of internal changes that were unique to Israeli requirements, including the fitting of chaff/flare dispensers. The first IDFAF F-16, together with some other Vipers, was flown to Hill AFB, where initial pilot and ground crew conversion took place.

The first four F-16s, known as Netz (Hawk) in IDFAF service and wearing standard sand/brown/green camouflage colors, arrived in Israel in July of 1980 after an 11 hour delivery flight. IOC was achieved a few weeks later. Although the last 22 of these aircraft were put on hold by the Reagan Administration following the Raid on the Osirak reactor, final deliveries took place in 1981.