Source: DTN News - - This article compiled by Roger Smith from reliable sources BAE Systems 10 Jan 2011 | Ref. 004/2011
(NSI News Source Info) BRISTOL, U.K. - January 15, 2011: BAE Systems has successfully demonstrated a prototype device that will serve as an effective non-lethal deterrent against pirate attacks on commercial vessels such as oil tankers and container ships.Piracy worldwide is on the rise according to reports from the ICC’s International Maritime Bureau (IMB), with 430 attacks worldwide reported last year, up from 406 in 2009. As pirates increase their range of operations and their capabilities, commercial shipping agents are increasingly looking for ways of preventing attacks whilst avoiding armed guards on their ships. 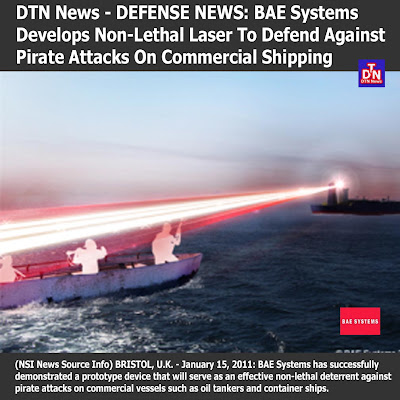 In order to help combat the growing piracy threat BAE Systems conducted a study of pirate’s behaviour and a company-wide capability survey. This led to the development of the concept of using a non-lethal laser, which would leave only temporary effects, to distract and deter potential attackers from a distance. Leveraging the capability of its Optics and Laser Technology Department within its Advanced Technology Centre, BAE System’s researchers conducted a number of experiments to assess the feasibility of laser distraction as a non-lethal weapon. The research team has now successfully demonstrated a suitable laser at the Pershore Trials Range in Worcester over a variety of distances in a variety of conditions. The laser beam is capable of providing a visual warning to pirates at distances greater than 2km, and of disorientating attackers sufficiently at lesser distances so that weapons cannot be targeted effectively. At all times the power levels of the laser remain eye safe. Roy Clarke, BAE Systems capability technology lead for laser photonic systems, said: “The effect is similar to when a fighter pilot attacks from the direction of the sun. The glare from the laser is intense enough to make it impossible to aim weapons like AK47s or RPGs, but doesn’t have a permanent effect.”

The laser was trialled during night and day in varying weather conditions at the Worcester facility. Cameras were placed at the target location to demonstrate the level of beam intensity and divergence produced by the test runs. Beam oscillation techniques were also demonstrated. The researchers have developed a bespoke Neodymium Yttrium Aluminium Garnet (Nd:YAG) laser which is an effective deterrent at relatively low power levels. By utilising targeting systems and changing beam patterns, the distraction effect can be made more pronounced and be used against multiple targets. Clarke continued: “We successfully showed that the laser works not just during the night, but also in full daylight. But, there are many more requirements to meet before placing a non-lethal laser weapon on commercial ships." When fitted on commercial ships the laser distraction system could utilise its own targeting capability or integrate with existing ship radar and sensor systems to control the direction and power of the beam. It could therefore work semi-autonomously and would also include security features to ensure it could not be used by pirates if they boarded the ship. Bryan Hore, BAE Systems business development manager and the lead for the anti-piracy programme, said: “Laser distraction is part of a wider programme of anti-piracy technologies being developed by BAE Systems, including radar systems, which utilises expertise and knowledge from the military domain. The aim of the laser distraction project is now to develop a non-lethal deterrent to pirates, which has no lasting effects, which can work in a maritime environment, be operated by the crew at no risk, and be cost effective.”

The International Chamber of Commerce’s International Maritime Bureau is a non-profit organisation which monitors the number of piracy and armed robbery incidents in shipping lanes worldwide. The vast majority of pirate attacks reported last year, 210, were reported in Somalia. At the present time Somali pirates hold 25 vessels and 586 hostages. The development of the laser distraction device is part of the company’s where BAE Systems is using capabilities and knowledge gained within the military domain to understand, analyse and demonstrate a layered set of defensive techniques for commercial maritime protection.