Source: DTN News - - This article compiled by Roger Smith from reliable sources By CARLOTTA GALL and RUHULLAH KHAPALWAK - The New York Times
(NSI News Source Info) KABUL, Afghanistan - December 16, 2010: As the Obama administration reviews its strategy in Afghanistan, residents and even a Taliban commander say the surge of American troops this year has begun to set back the Taliban in parts of their southern heartland and to turn people against the insurgency — at least for now. 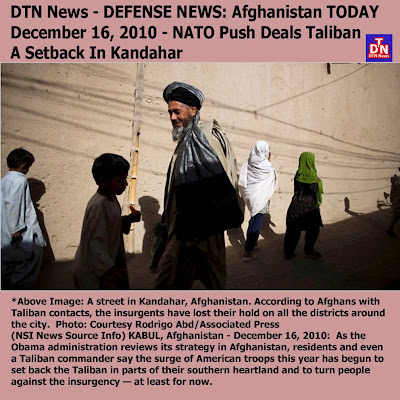 The stepped-up operations in Kandahar Province have left many in the Taliban demoralized, reluctant to fight and struggling to recruit, a Taliban commander said in an interview this week. Afghans with contacts in the Taliban confirmed his description. They pointed out that this was the first time in four years that the Taliban had given up their hold of all the districts around the city of Kandahar, an important staging ground for the insurgency and the focus of the 30,000 American troops whom President Obama ordered to be sent to Afghanistan last December.

“To tell you the truth, the government has the upper hand now” in and around Kandahar, the Taliban member said. A midlevel commander who has been with the movement since its founding in 1994 and knows it well, he was interviewed by telephone on the condition that his name not be used.

NATO commanders cautioned that progress on the battlefield remained tentative. It will not be clear until next summer if the government and the military can hold on to those gains, they said. Much will depend on resolving two problems: improving ineffectual local governments and strengthening Afghan troops to fight in NATO’s place.

The Taliban commander said the insurgents had made a tactical retreat and would re-emerge in the spring as American forces began to withdraw.

But in a dozen interviews, Afghan landowners, tribal elders and villagers said they believed that the Taliban could find it hard to return if American troops remained.

The local residents and the Taliban commander said the strength of the American offensive had already shifted the public mood. Winning the war of perceptions is something the military considers critical to the success of the counterinsurgency strategy being pursued by Gen. David H. Petraeus, the coalition commander.

While coalition gains in other parts of the south are spottier, Afghans with Taliban contacts say the insurgents have lost their bases in the rural areas around Kandahar and are a much weakened force in their old southern stronghold. Commanders have taken refuge across the border in Pakistan and are unwilling to return, they said.

“They are very upset and worried,” said one Afghan who lives in Quetta, the western Pakistani city where the Taliban leadership is based, and knows a number of Taliban commanders who live in his neighborhood. “This whole operation in the south has made it very difficult for them. They have lost their heart. A lot of leaders have been killed.”

NATO commanders have issued reams of press releases on the capture and killing of Taliban fighters.

While an emphasis on body counts can be misleading when fighting an indigenous insurgency, Afghans around the country said the strategy of targeted raids on Taliban field commanders had hit the movement hard. The Taliban member also confirmed the impact, and said the Taliban were dismayed to see the much more concerted offensive by coalition forces, as well as the corresponding shift in the public mood.

American forces have occupied former bases of the Taliban in districts surrounding Kandahar, and set up positions in the same buildings, including the Taliban’s main headquarters and courthouse in Sayedan where they held trials under Islamic law, or Shariah.

“Positioning themselves in the Taliban bases signals to the people that the Taliban cannot come back,” said one landowner from Panjwai, an important district outside the city of Kandahar. Like many others, he asked not to be named, indicating there was still widespread fear of Taliban retribution in the rural communities.

“Our Afghan security forces are assuring us that they will stay, and that gives hope,” said Hajji Agha Lalai, a provincial council member from Panjwai District. A medical worker who visited his home village in Panjwai on Monday said the area that used to be the front line between the government and the Taliban was now completely cleared and safe.

The coalition and government forces had blocked access to Panjwai and Zhare, another important district outside Kandahar, with wire fencing, concrete blast walls and tank berms so that all traffic had to filter through their checkpoints, making it nearly impossible for insurgents to move through the area clandestinely, the Taliban member and residents said.

Raids on houses of suspected Taliban members have also badly rattled those Taliban remaining in the area, landowners and residents said. Most of the Taliban have either fled or gone into hiding, they said. One local landlord, Abdul Aleem, said a group of Taliban had begged for food and lodging from villagers in Zhare 20 days ago, but were terrified whenever they heard shooting.

The Taliban are even more concerned that the Americans are gaining the upper hand in the battle of perceptions on who is winning the war, several people with contacts in the Taliban said. “The people are not happy with us,” the Taliban fighter said. “People gave us a place to stay for several years, but we did not provide them with anything except fighting. The situation is different now: the local people are not willingly cooperating with us. They are not giving us a place to stay or giving us food.”

NATO’s announcement that it would remain until a transfer to Afghan forces in 2014 has also convinced people that it will not withdraw quickly, he said.

“The Americans are more serious, and another thing that made people hopeful was when they said they would stay until 2014,” the Taliban commander said. “That has made people change their minds.”

That shift in support could hamper Taliban operations, said one landowner, a former guerrilla fighter who has Taliban contacts. “It will hurt the leadership because they will not have people to work for them in the area,” he said.

The Taliban leadership was so concerned that it held a meeting recently to discuss how to counter the American-led offensive and regain key districts around the city of Kandahar, the Taliban member said. They appointed a new commander, Maulavi Sattar, to oversee the winter campaign in Kandahar and are pressing fighters to stall expansion of coalition and government forces in the province, and prevent recruitment of local police officers in the districts.

Nevertheless the Taliban fighters were losing heart and showing signs of division, said the Taliban commander, who has been sheltering in Kandahar city since the insurgents were routed from his district in October.

He said he traveled recently to the Pakistani border town of Chaman and met three Taliban commanders there. But when he asked when they were coming back to Kandahar, they said they were reluctant to return and feared they would be killed. “They said they feared our own men, that other Taliban might betray them,” he said.

The Afghan living in Quetta said that Taliban commanders he knew were trying to recruit and pay others to fight while holding themselves back. “One threw me 50,000 Pakistani rupees and said, ‘If you have anyone who can go and fight, take them and go and fight,’ ” he said. “When they threw me the money, they said, ‘If you don’t want to go and fight, could you find some recruits for the spring?’ ”

The Taliban leaders and commanders will certainly not give up, Afghans familiar with them said. Some of them have moved to Pakistan and will rest up until the spring. Others have shifted to more remote areas, where the coalition and government presence is not as strong.

“The Taliban will come back in the spring, but most people predict that they will not come with the force of previous years because they have been hit very hard and they keep being hit,” the landowner from Kandahar said.

“And if the Americans stay, the Taliban commanders will never come back,” he said.