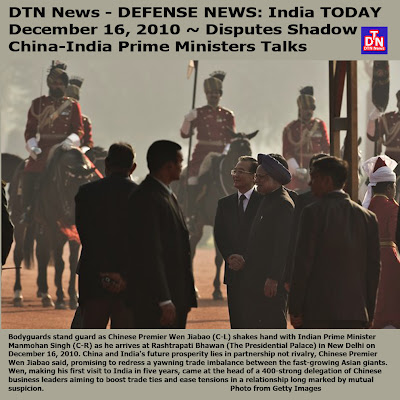 Chinese Prime Minister Wen Jiabao, making his first visit to India in five years at the head of a 400-strong business delegation, has sought to focus the trip on boosting bilateral trade.

In a speech to a business forum in New Delhi on Wednesday, Wen said his delegation would strike deals worth 16 billion dollars in a range of sectors from finance to power generation.

"China and India are partners for cooperation, not rivals in competition," Wen said, adding that there was "enough space in the world" for China and India's fast-growing economies to develop together.

But while bilateral trade between the Asian giants has boasted impressive gains and is expected to top 60 billion dollars this year, relations between Beijing and New Delhi are still tainted by suspicion and mutual distrust.

A constant thorn involves a bitter and seemingly intractable dispute over areas of their common Himalayan border, which triggered a brief but bloody war in 1962.

Fourteen rounds of talks on the border issue have yielded no progress, and India fears China is becoming more assertive about its territorial claims.

Beijing complained bitterly last year over visits to the northeast state of Arunachal Pradesh -- which China claims in full -- by Prime Minister Manmohan Singh and the Dalai Lama.

Tibet's exiled spiritual leader has lived in India since fleeing a failed uprising against Chinese rule in 1959 and his presence here is an irritant for the Chinese side.

Hundreds of Tibetan exiles marched in New Delhi on Wednesday, burning an effigy of Wen and vowing to keep up their anti-China protests until the premier leaves India for Pakistan on Friday.

"We will shed our blood and give our lives for the freedom of our homeland," they chanted as armed police monitored the rally closely.

Other sensitive topics expected to come up during the Wen-Singh talks are China's close ties with India's arch-rival Pakistan and New Delhi's concerns that a Chinese dam on the Brahmaputra river in Tibet could disrupt water supplies downstream in India.

Singh is also likely to seek a promise that China will stop issuing special stapled visas to Indian Kashmiris visiting China -- a practice India views as a denial of its sovereignty over the disputed Himalayan region.

Some commentators have called on Singh to take a tough line with his guest, saying India has been too accommodating of Chinese provocations in the past.

"Successive Indian governments have tried to cast aside irritants and make nice with China," said Brahma Chellaney, author of "Asian Juggernaut: The Rise of China, India and Japan."

"But that clearly hasn't worked. In fact, the feckless approach has only encouraged Beijing to up the ante by finding new ways to needle India," Chellaney said.

Some note that even the impressive trade figures contain a downside for India, with a trade surplus in China's favour that is likely to reach 20 billion dollars this year.

Wen acknowledged the imbalance in his speech and promised that China stood ready to "facilitate access" of Indian IT and pharmaceutical products to the Chinese market.