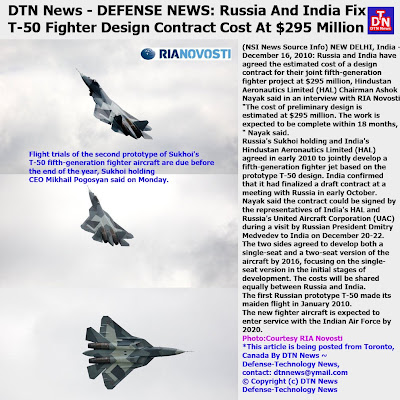 "The cost of preliminary design is estimated at $295 million. The work is expected to be complete within 18 months," Nayak said.

Russia's Sukhoi holding and India's Hindustan Aeronautics Limited (HAL) agreed in early 2010 to jointly develop a fifth-generation fighter jet based on the prototype T-50 design. India confirmed that it had finalized a draft contract at a meeting with Russia in early October.

Nayak said the contract could be signed by the representatives of India's HAL and Russia's United Aircraft Corporation (UAC) during a visit by Russian President Dmitry Medvedev to India on December 20-22.

The two sides agreed to develop both a single-seat and a two-seat version of the aircraft by 2016, focusing on the single-seat version in the initial stages of development. The costs will be shared equally between Russia and India.

The first Russian prototype T-50 made its maiden flight in January 2010.

The new fighter aircraft is expected to enter service with the Indian Air Force by 2020.