Source: DTN News - - This article compiled by Roger Smith from reliable sources Xinhua
(NSI News Source Info) TEHRAN, Iran - December 16, 2010: Iran on Wednesday accused the United States, Britain and Israel of involving in the deadly suicide bomb attack in the country which left 39 killed and more than 50 others wounded.

The attack occurred in front of the Imam Hussein mosque in southeastern port city of Chabahar on Wednesday when people gathered for a mourning ceremony on the religious occasion of Tasua, local satellite Press TV said. 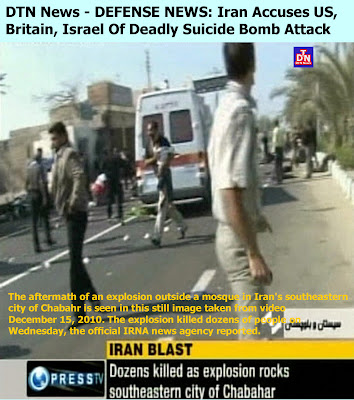 Tasua is commemorated by Shiite Muslims, marking the eve of the day when Hussein ibn Ali, the grandson of Prophet Muhammad, was killed.

According to media, the Pakistan-based Sunni rebel group Jundallah (God' s soldiers) has claimed responsibility for the deadly attack.

"The experience from the past incidents indicate that the U.S. and U.K. intelligent services are behind the crimes like the Wednesday morning bombing in Chabahar," Boroujerdi was quoted as saying.

Meanwhile, Iranian Deputy Interior Minister Ali Abdollahi told official IRNA news agency that the equipment and facilities nabbed on Wednesday revealed that the bombing agents were supported by the intelligent services of the region and the United States.

Iran's Parliament Speaker Ali Larijani said Wednesday that such terrorist acts "are funded by the U.S. and Israeli intelligent services," according to local Mehr News agency.

"In the past, the United States recruited some in Afghanistan to create discord among Shiite and Sunni Muslims (by carrying out terrorist acts)," Larijani was quoted as saying.

Chabahar is the Iranian port city on the coast of Oman Sea situated in the southeastern Sistan-Baluchestan province with the majority of ethnic Baluchis and Sunni Muslims.

"Israel and the U.S. intelligent services are behind these terrorist acts and they should know that such behaviors will receive response from the Iranian nation," Larijani said.

According to the official IRNA news agency, Director General of Sistan-Baluchestan provincial Forensic Medicine Office Fariborz Ayati said some women and children were among the victims.

An unidentified police commander of Sistan-Baluchestan province was quoted as saying by ISNA that four policemen were among the victims as well.

According to an earlier report by ISNA, the explosion occurred at 10:30 a.m. local time (0700 GMT) in front of the governor's office building of Chabahar in Sistan-Baluchestan province close to an emergency car of the Red Crescent Society.

Over the past three days, there had been threats of bomb attacks against mourners in Sistan-Baluchestan, and the emergency staff has been on alert, Iranian Red Crescent Society chief Mahmoud Mozaffar was quoted as saying by ISNA, adding that among the injured, six were emergency workers.

Meanwhile, the state IRIN TV said three suicide bombers were involved in the attack. Only one of them succeeded, the second was shot dead, and the last was arrested.