Source: DTN News - - This article compiled by Roger Smith from reliable sources By SUSANNE M. SCHAFER, Associated Press
(NSI News Source Info) TORONTO, Canada - December 13, 2010: Navy documents released Thursday by U.S. Sen. Lindsey Graham's office say that up to 128 of the stealthy futuristic jets will be based in Cherry Point, N.C., and 88 aircraft and a training unit will go to Beaufort, S.C. Some 96 jets will be based at Miramar, Calif., and 88 will go to Yuma, Ariz.

The documents say the jets will begin arriving in phases starting in 2012.

"This is wonderful news and I could not be more pleased with today's announcement," Graham, R-S.C., said in a statement. "Beaufort has a long and storied history with the Marine Corps. With the decision today, Beaufort will continue to play an integral role in the future of the Corps."

The Marine Corps F-35B is one of three versions being built for the military to replace the aging F/A-18 Hornet aircraft, AV-8B Harrier jump jets and EA-6B Prowlers. The Navy and Air Force will have their own versions of the jet.

The decision will send: 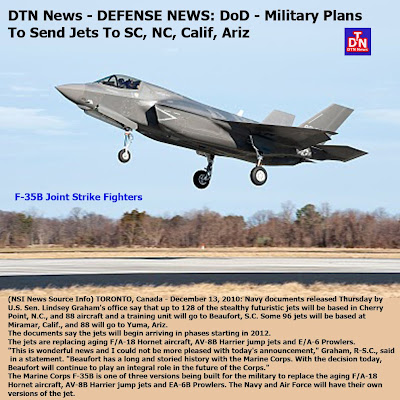 Budget cutters in Washington have scrutinized the aircraft because their $380 billion price tag makes them the Pentagon's largest weapons program. It also has experienced delays in testing.

Boosters of the aircraft, such as Rep. Joe Wilson, R-S.C., said the program means about 1,700 jobs and $400 million in construction for South Carolina alone.

"What an exciting day for Lowcountry residents and the 'Fighter family' as we celebrate the 'Sound of Freedom' in South Carolina," Wilson said in a statement.

North Carolina Gov. Beverly Perdue had lobbied for all the East Coast warfighting squadrons to land in Cherry Point, and leaving the pilot training to Beaufort.

Some residents in Beaufort objected to potential noise from the new jets, which they say will be heavier and require more thrust than the F/A-18s currently being flown. They also say the pilot training unit will require more takeoffs and landings than operational units and that not enough testing on noise problems has been done.

Their complaints were heard by outgoing South Carolina Gov. Mark Sanford, who wrote Defense Secretary Robert Gates last month that support for the Marine Corps in the normally military-friendly state could fall if the new jets prove to be louder than expected.