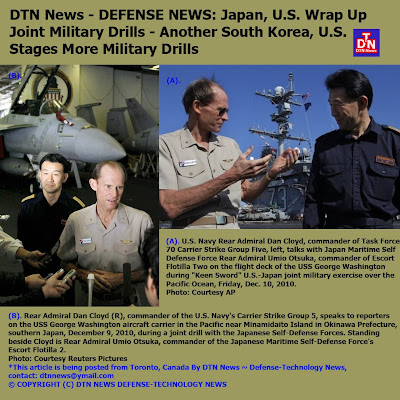 About 40,000 U.S. service members and Japanese military personnel took part in the exercises that the U.S. Air Force called the largest joint, bilateral field training exercise between the two nations. It was the 10th such exercise since 1986.

The "Keen Sword" drills took place on military sites in Okinawa, mainland Japan and the waters surrounding it, according to officials.

They focused on air and missile defense, base security and force protection, search and rescue, and maritime defense. More than 400 aircraft and at least 60 ships took part, officials said.

The drill is not directed at any nation, officials said. Rather, it was intended to practice and evaluate the procedures needed to respond to the defense of Japan or a regional crisis

The drill took place days after South Korea and the United States wrapped up joint military exercises on the Yellow Sea.

South Korea has begun another week-long series of live-fire military exercises along most of its coastline.

North Korea said that attack was in direct response to South Korean military exercises there. It says drills by the South are a provocation.

There have been intense international diplomatic efforts to calm the crisis.

The US has been putting pressure on China - the North's main ally - to intervene in the crisis.

In a hardening of policy, South Korea has threatened to mount air strikes on the North if it carries out further attacks.

China, which supplies food and fuel to North Korea, has so far refused to condemn the attack on Yeonpyeong, the first attack of its kind on South Korean civilians since the Korean War ended in a ceasefire in 1953.

Both Japan and South Korea have carried out joint military exercises with the US in the past few weeks.

China has criticised those exercises as an attempt at US containment in an area Beijing sees as its own responsibility.

North Korea has been defending its shelling of Yeonpyeong as a response to extensive live-firing from the South.