Source: DTN News by Roger Smith
(NSI News Source Info) WASHINGTON - December 13, 2010: "CHRISTMAS IN WASHINGTON is a holiday treasure that brings together some of today's best musical artists for a wonderful celebration of the season," said Michael Wright, executive vice president/head of programming for TNT, TBS and TCM. "We're especially excited to welcome host Ellen DeGeneres to the festivities. It's certain to be a night to remember." 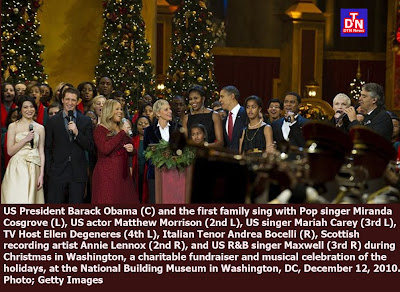 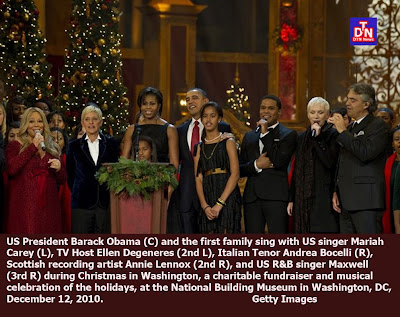 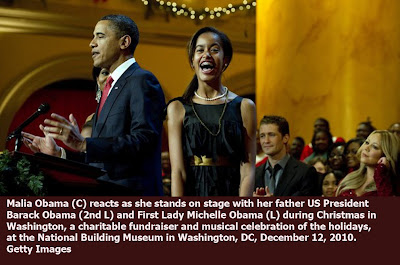 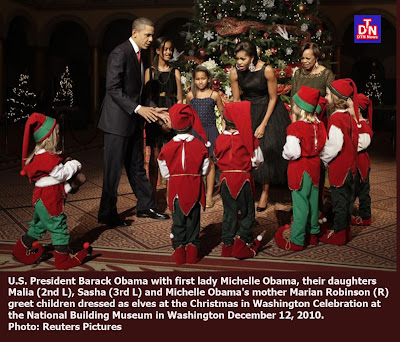 Annually attended by the President and First Lady and other Washington VIPs, CHRISTMAS IN WASHINGTON is a holiday musical celebration benefiting the Children's National Medical Center. The show will be taped at the National Building Museum in Washington, D.C. Sunday, Dec. 12. TNT's Dec. 17 premiere telecast will be the network's 12th presentation of CHRISTMAS IN WASHINGTON, which is in its 29th year overall. TNT's telecast will be followed at 9 p.m. (ET/PT) by a special holiday presentation of the classic The Wizard of Oz.

CHRISTMAS IN WASHINGTON, a two-time Emmy(R)-winning program for Musical Direction and 12-time nominee overall, is executive-produced by 13-time Emmy-winner George Stevens, Jr. and directed and produced by three-time Emmy-winner Michael Stevens for The Stevens Company. Most recently they produced the We Are One concert at the Lincoln Memorial on the eve of the Inauguration of President Barack Obama and were awarded an Emmy for the The Kennedy Center Honors as Outstanding Special in September. For TNT, Ricki Rosenfeld and David Bryant serve as executives in charge of production, with Mark Shimmel returning for his sixth year as a Music Executive for TNT.

Ellen DeGeneres is a beloved, Emmy(R)-winning television icon and entertainment pioneer. Her distinctive comic voice has resonated with audiences from her first stand-up comedy appearances through her work today on television, in film and in the literary world. DeGeneres has made a home for herself in the daytime arena with her hit syndicated talk show, the Emmy-winning The Ellen DeGeneres Show. DeGeneres has hosted four one-hour variety specials for TNT's sister network, TBS. She has also hosted the Academy Awards(R) in 2007 and the Primetime Emmys in 2001 and 2005. Prior to the launch of her talk show, DeGeneres scored simultaneous achievements with films like Finding Nemo, books like My Point�And I Do Have One and the hit sitcom Ellen, which earned her a 1997 Peabody Award and writing Emmy for "Puppy Episode," when her character came out as a gay woman to a record 46 million viewers. DeGeneres is passionate about bringing awareness to the people of New Orleans, her hometown, which was devastated by Hurricane Katrina, and her efforts have resulted in The Ellen DeGeneres Show raising over $10 million to improve the lives of New Orleans residents. Overall, The Ellen DeGeneres Show has raised over $50 million and brought attention to various causes, including global warming and animals. Additionally, DeGeneres continues to raise awareness about breast cancer, and served as spokesperson for General Mills' breast cancer awareness initiative, Pink for the Cure, and hosted special episodes of her show to mark Breast Cancer Awareness Month.

Mariah Carey is an international superstar whose 13th studio album, Merry Christmas II You, is in stores now. The album follows her 2009 multi-million-selling Memoirs Of An Imperfect Angel, her 2008 multi-platinum E=MC� and 2005 10-million-selling The Emancipation Of Mimi, the latter of which generated three Grammys(R), two #1 singles and countless more honors during its 18-month stay on the charts. Soundscan's biggest-selling album of 2005, Mimi featured "We Belong Together" (Grammy winner forBest Female R&B Vocal and Best R&B Song) and "Don't Forget About Us," Mariah's 16th and 17th #1 career singles, respectively. Three years later, Carey surpassed Elvis Presley's record when "Touch My Body" from E=MC� became her 18th #1 Billboard Hot 100 hit. The success of E=MC� brought total sales of Carey's albums, singles and videos to more than 200 million worldwide, making her the top-selling female recording artist in history.

Miranda Cosgrove is the star of Nickelodeon's award-winning, international hit TV series iCarly. At just 9 years old, she landed roles co-starring in Nick's Drake & Josh , as well as the film School of Rock, with Jack Black. Cosgrove recently lent her voice to the character "Margo" in Universal's summer blockbuster animated feature Despicable Me opposite Steve Carell and Jason Segel. She also recently completed a guest starring role on an episode of the Emmy(R) nominated show, The Good Wife. An accomplished singer, Cosgrove recorded the theme song from iCarly, as well as the theme song for Cloudy With a Chance of Meatballs featured on the film's soundtrack. Signed to Columbia Records, Cosgrove released her first solo album, Sparks Fly, earlier this year. She co-wrote the album's first hit single "Kissin' U" with famed hit maker Dr. Luke.

Annie Lennox, one of the most successful, iconic and talented artists of the late 20th century, is back with her sixth solo album and first-ever holiday recording, A Christmas Cornucopia, which is being released in the U.S. on Nov. 16. In 1971, at the age of 17, Lennox left her native Scotland to attend the Royal Academy of Music in London. She formed The Tourists and later Eurythmics with Dave Stuart. After the massive success of their second album, Sweet Dreams are Made of This, Eurythmics went on to become a household name. Lennox released her debut solo album, Diva, in 1992, followed it with Medusa in 1995, Bare in 2003 and Songs of Mass Destruction in 2007, selling more than 80 million albums and 20 international hits. Throughout her career, Lennox has received countless awards, including five prestigious Ivor Novello Awards, four Grammys, two Golden Globes, eleven Brit Awards, a World Music Award, the ASCAP Founders Award, The Billboard Century Award, and this year she was maid UNAIDS Goodwill Ambassador. In 2004, she earned an Academy Award for her collaboration with composer Howard Shore and writer Fran Walsh on the song "Into the West" from The Lord of the Rings: The Return of the King. As a dedicated activist and campaigner, Annie works with numerous organizations, including Oxfam, Amnesty International, Comic Relief and Greenpeace. Her song "Sing" launched the SING campaign (www.annielennoxsing.com), a humanitarian organization Lennox founded to raise awareness and support for the AIDS/HIV pandemic in Africa.

Maxwell took the music scene by storm in1996 with his debut, Urban Hang Suite. Just two years earlier, he had signed with Columbia Records at the tender age of 21, already having composed more than 300 songs. The critically acclaimed Urban Hang Suite received a Grammy nomination for Best R&B Album and went on to achieve double-platinum status. Maxwell's MTV: Unplugged (1997) achieved platinum status with his live rendition of "This Woman's Work." He was heralded as the future of soul music and proved his staying power when he followed up with 1998's platinum seller Embrya. In 1999 Maxwell's single, "Fortunate," from the Life soundtrack, became Billboard's #1 hit of the year. Maxwell's third album, Now(2001) debuted at #1 on the Billboard Top 200 Album Chart, selling 300,000 copies its maiden week and eventually reaching double-platinum status. In June 2009, Maxwell released his fourth studio album, BLACKsummer's Night, the first of a planned trilogy. The album debuted at #1 on the Billboard charts selling 319,000 copies, winning two Grammy awards, and has gone on to achieve platinum status. His Blacksummersnight tour defied the declining touring market, selling out arenas across America and was one of the top grossing tours in both 2009 and 2010.

Matthew Morrison currently stars as Will Schuster, the optimistic high-school music teacher on the enormously popular series Glee. A star of stage and screen, Morrison has been nominated for a Tony, an Emmy and a Golden Globe(R). Next year, he will release his debut solo album with Mercury Records. Morrison studied musical theater, vocal performance and dance at New York University's renowned Tisch School of the Arts. His big Broadway break came when he was cast as heartthrob Link Larkin in the hit Hairspray. Morrison was later nominated for a Tony for his role in The Light in the Piazza and received a Drama Desk nomination for Outstanding Actor in a Musical for 10 Million Miles. He also starred in the Tony-winning revival of South Pacific at Lincoln Center.

Turner Broadcasting System, Inc., a Time Warner company, creates and programs branded news, entertainment, animation and young adult media environments on television and other platforms for consumers around the world.