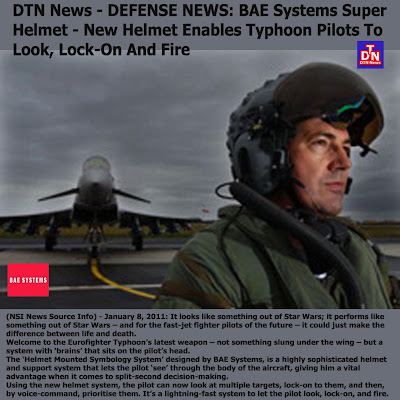 Welcome to the Eurofighter Typhoon’s latest weapon – not something slung under the wing – but a system with ‘brains’ that sits on the pilot’s head.

The ‘Helmet Mounted Symbology System’ designed by BAE Systems, is a highly sophisticated helmet and support system that lets the pilot ‘see’ through the body of the aircraft, giving him a vital advantage when it comes to split-second decision-making.

Using the new helmet system, the pilot can now look at multiple targets, lock-on to them, and then, by voice-command, prioritise them. It’s a lightning-fast system to let the pilot look, lock-on, and fire.

The pilot can even do this when looking at targets over the shoulder – or at targets picked up by the radar which is directly underneath the floor of the aircraft.

This ‘look and shoot’ capability, married to a super-wide field of view gives the Typhoon pilot a 24hour all-weather field of vision. 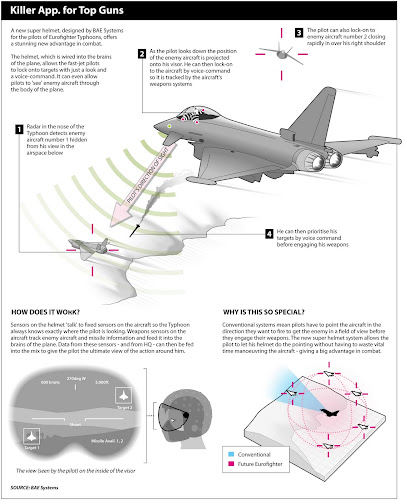 The helmet works by having a number of fixed sensors around the cockpit area. As the pilot moves his head, the sensors on his helmet move in relation to the sensors on the aircraft ensuring the aircraft knows exactly where and what he is looking at.

Imagery projected onto the pilot’s visor gives, amongst other information, speed, heading and height – and crucially, it also gives the precise position of any enemy aircraft or missiles. The imagery, which remains stable and accurate at all viewing angles, means the pilot can make rapid decisions without ever having to take his eyes off the target.

Mark Bowman, Chief Test Pilot for BAE Systems, said: “This is a major advance in terms of combat capability and is something that gives Typhoon pilots a significant advantage when it comes to air combat. There is no doubt in my mind that the Eurofighter Typhoon leads the world in terms of this kind of capability – and this is something that all who have worked on the system can feel extremely proud of. It is a major advance in aviation capability.”

The new helmet system is expected to go into service with the UK’s Royal Air Force this year.