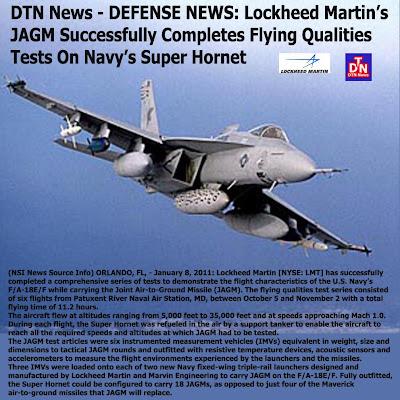 The aircraft flew at altitudes ranging from 5,000 feet to 35,000 feet and at speeds approaching Mach 1.0. During each flight, the Super Hornet was refueled in the air by a support tanker to enable the aircraft to reach all the required speeds and altitudes at which JAGM had to be tested.

The JAGM test articles were six instrumented measurement vehicles (IMVs) equivalent in weight, size and dimensions to tactical JAGM rounds and outfitted with resistive temperature devices, acoustic sensors and accelerometers to measure the flight environments experienced by the launchers and the missiles.

Three IMVs were loaded onto each of two new Navy fixed-wing triple-rail launchers designed and manufactured by Lockheed Martin and Marvin Engineering to carry JAGM on the F/A-18E/F. Fully outfitted, the Super Hornet could be configured to carry 18 JAGMs, as opposed to just four of the Maverick air-to-ground missiles that JAGM will replace.

For the flight series, the two “three-packs” of JAGM IMVs were carried at the most challenging stations—outboard and midboard—in varying load-out combinations with other weapon systems including bombs, anti-radiation missiles and air-to-air missiles, as well as external fuel tanks.

“The F/A-18E/F presents some of the most challenging environments for JAGM,” said Hady Mourad, JAGM program director at Lockheed Martin Missiles and Fire Control. “Collecting vibration, acoustic and shock data in these environments for 11.2 hours of flight with no anomalies or problems represents a very successful beginning of flight test efforts that will continue into the EMD phase to integrate JAGM on the Super Hornet.”

Lockheed Martin’s Deputy Program Director Rick Packard, who is responsible for integrating JAGM with Navy platforms, said the company was very pleased with the results of the flying qualities tests. “When you couple the highly successful outcome of these flying quality tests with our previous hot and cold temperature missile motor tests, we remain confident in our ability to provide our customers with a single-missile-motor offering for JAGM, a critical capability voiced by all three Services since the inception of the joint program.”

“One of the key tenets of the JAGM program is to replace three aging weapon systems and their associated parts, supply and logistics networks with one weapon to increase operational flexibility and reduce support costs,” Packard said. “We remain steadfastly committed to meeting that requirement.”

Headquartered in Bethesda, Md., Lockheed Martin is a global security company that employs about 133,000 people worldwide and is principally engaged in the research, design, development, manufacture, integration and sustainment of advanced technology systems, products and services. The Corporation’s 2009 sales from continuing operations were $44.0 billion.