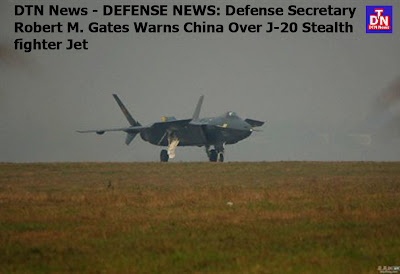 "They clearly have the potential to put some of our capabilities at risk, and we have to pay attention to them. We have to respond appropriately with our own programs," Gates told reporters as he traveled to Beijing for three days of talks with senior Chinese leaders.

Gate's visit to China is his first since 2007, when he was Defense secretary in the George W. Bush administration. He was supposed to go in June 2010, but the visit was canceled amid the downgrading of military ties after the U.S. announcement of a $5.4-billion weapons sale to Taiwan, a U.S. ally that China considers a breakaway province.

With the overall U.S.-China relationship on an upswing, Gates voiced hope that the U.S. would be able to persuade Chinese military leaders to cut back on their pursuit of advanced military capabilities.

"My hope is that through the strategic dialogue," he said, "maybe the need for some of these capabilities is reduced."

But there is little sign that China's military leadership wants the kind of regular contacts that Pentagon officials have been seeking for years as a way of easing tension with China and its fast-modernizing military.

China's investment in new ballistic missiles designed to destroy naval vessels, as well as its pursuit of a stealth fighter, has raised concern in the Pentagon that China's military is seeking the capability to destroy U.S. warships and aircraft operating off China's coast.

Military analysts say China also has been working on destroying satellites in orbit. This capability would enable it to shoot down satellites used by the U.S. military in the event of war.

Gates said the missile program "was fairly far along" and that the stealth fighter "may be somewhat further ahead in the development" than U.S. intelligence had foreseen, though the aircraft is considered years away from becoming operational.

He said there were some doubts among U.S. intelligence analysts about "how stealthy" the Chinese plane would actually prove to be. A picture showing one of the planes on a runway in China was recently leaked, a move U.S. officials said was deliberately designed by the Chinese military to show off the plane, even though it has yet to fly.

The proposed budget also would buy fewer F-35s, an advanced U.S. fighter that would play a key role in any war with China. Despite the slowdown in the program, Gates said the U.S. would still have far more advanced fighters by 2020 than any other country.

The talks in Beijing come a week before a state visit to the U.S. by China's President Hu Jintao, a trip that Beijing sees as an important demonstration of Hu's stature after a decade in power. Gates said it was clear that Beijing wanted him to visit China to set a positive tone before Hu's trip to Washington.

Pentagon officials have for years sought closer military ties with China, arguing that regular communication on strategic and regional issues would help prevent miscalculations in case of a crisis over the region's numerous points of contention, including North Korea, the South China Sea and Taiwan.

Gates urged China's leaders to ignore developments such as the arms sales to Taiwan, which he described as a political decision that should not affect U.S.-China military relations. But he did not appear overly optimistic that his talks in Beijing would lead to such an understanding with Chinese leaders.

"Rather than some kind of a dramatic breakthrough, I think that just getting some things started would be a positive outcome," he said.

His itinerary in China includes meetings with Hu and senior military and civilian leaders, as well as a visit to the headquarters of the 2nd Artillery Corps, which commands China's nuclear arsenal.

After leaving Beijing, Gates is scheduled to go to Japan and South Korea for talks that Pentagon officials said would focus on the security situation on the Korean peninsula.