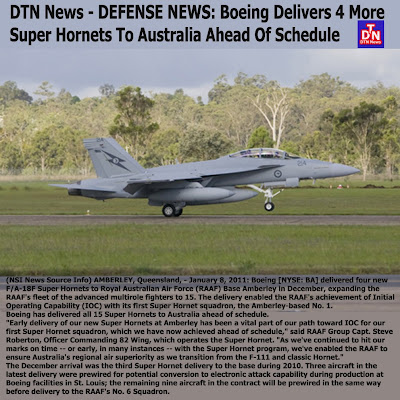 Boeing has delivered all 15 Super Hornets to Australia ahead of schedule.

"Early delivery of our new Super Hornets at Amberley has been a vital part of our path toward IOC for our first Super Hornet squadron, which we have now achieved ahead of schedule," said RAAF Group Capt. Steve Roberton, Officer Commanding 82 Wing, which operates the Super Hornet. "As we've continued to hit our marks on time -- or early, in many instances -- with the Super Hornet program, we've enabled the RAAF to ensure Australia's regional air superiority as we transition from the F-111 and classic Hornet."

"The Boeing Super Hornet team has surpassed expectations by delivering 15 aircraft to the RAAF in 2010 instead of the 12 originally scheduled," said Carolyn Nichols, Australian Super Hornet program manager for Boeing. "Additionally, each aircraft has been delivered within budget. We are fully committed to ensuring the same delivery success and budget excellence throughout 2011. We congratulate the men and women of the RAAF on the outstanding achievement of reaching No. 1 Squadron's Super Hornet IOC ahead of schedule."

The Australian government announced in March 2007 that it would acquire 24 of the advanced Block II versions of the Super Hornet, all of which are equipped with the Raytheon-built APG-79 Active Electronically Scanned Array (AESA) radar.

The Boeing Super Hornet is a multirole aircraft, able to perform virtually every mission in the tactical spectrum, including air superiority, day/night strike with precision-guided weapons, fighter escort, close air support, suppression of enemy air defenses, maritime strike, reconnaissance, forward air control and tanker missions. Boeing has delivered more than 440 F/A-18E/Fs to the U.S. Navy. Every Super Hornet produced has been delivered on or ahead of schedule and on budget.